Housed in the Old Town Hall on Lavender Hill, the Battersea Arts Centre is an unexpected and delightful place. The building’s vibrancy and modernity are evident: the gorgeous mosaics on the floor dancing with colour, whilst bare bulbs dangle from the ceiling on red cords. The energy is relaxed, inclusive and engaged, and with multiple provisions for children and families, as well as accommodating the more traditional creative user who may wish to come and write or work, it is one of the most welcoming arts spaces I have experienced.

Heritage is key to the BAC’s ethos, with a collaboration with Wandsworth Museum and a vast array of outreach programmes planned, although to call them that does an injustice to their innovation. Shirking the traditional theatre outreach model – come to us and make theatre like ours – the BAC has set up The Agency, which collaborates with young people to make their entrepreneurial ideas a reality – come to us and tell us what you want to make. This prioritisation and nourishment of individual creativity, in whatever form that may take, is clearly an informing ideology at the very core of the BAC, returned to and reiterated by David Jubb, Artistic Director and CEO.

In the immediate aftermath of the terrible fire that devastated the Grand Hall in 2015, the generosity shown to the BAC was overwhelming. In this way too the BAC is for the many, rather than the few, with a programme of free or cheap events coming up to thank all those who supported the building and its staff during what could have been a total disaster. Rather beautifully, there are also plans in place to build allotments and community gardens to share the land and to encourage creation of a horticultural kind. In a very unique fashion, the BAC is developing a symbiotic relationship not with government donors or rich patrons (although these do obviously play a part) but with the local community. Generosity creates more generosity, and the BAC seems determined to create and share in a way that feels truly generous, rather than self-serving or superficial. 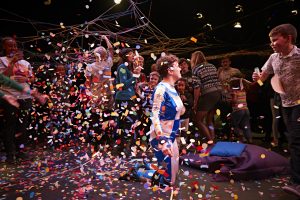 The Phoenix Season, then, is so much more than a season of theatre. It is a literal rising from the ashes of disaster, on wings of creativity, generosity, and determination. The season will begin where the fire interrupted, with the internationally acclaimed physical theatre company Gecko returning to complete their run of Missing (Thu 6 Sept – Sat 15 Sept). Half way through their run when the fire ripped through the hall, Gecko lost their set, props and costumes. This will be their first UK performance since the fire, and will be a poignant and visceral beginning to one of the most momentous seasons in the BAC’s history. Following Gecko will be the National Theatre of Scotland’s production of Adam (Tue 18 Sept – Sat 29 Sept), a remarkable and true story of a young, Egyptian trans man, featuring Adam Kashmiry, the real person on whom this drama is based. Byrony Kimmings comes to the BAC with I’m a Phoenix, Bitch (Wed 3 Oct – Sat 20 Oct), a personal work in synergy with the ravaged building. Kimmings creates multi-platform work designed to provoke change, and this mythical legend combines film, music and feats of physical strength.

Music will feature heavily in the Phoenix season, with The BAC Beatbox Academy making an appearance with Frankenstein: How to Make a Monster (Wed 24 Oct). This home-grown collective will be joined by a mixed bill of special guests performing their own sets, as well the Baby Beatbox and Junior Academy groups. Following on from this is another BAC nurtured talent, Seshie Henry and his I AM NEXT (Thu 25 Oct), a music and online entertainment platform designed to discover the hottest new UK urban music. Launched in 2014 through The Agency, I AM NEXT has already has a top reputation, with previous acts including Stormzy and Skepta. Rounding off the urban music in the Grand Hall will be the UK Beatbox Championships (Fri 26 – Sat 27 Oct). Part competition, part live show, this family-friendly event will see UK vocal artists push themselves to the limit in the battles for one of the four crowns. 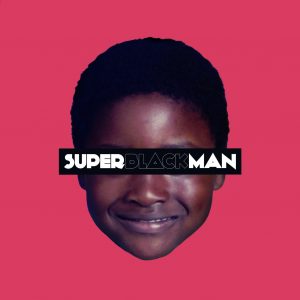 A Dead Centre and BAC co-production, Chekhov’s First Play (Wed 31 Oct – Sat 10 Nov) is a deconstructed and absurdist piece, exploring the essence of the great playwright and of performance itself. Information on relaxed performances of Chekhov’s First Play will be available in April, where audience members will be free to move about, make noise, and come and go during the performances. Following this is Lekan Lawal’s Superblackman (Thu 15 Nov – Sat 1 Dec), the story of Al and his secret ability to fly. Mythology and pop culture collide in this multi-art form exploration of power, mental health and representation. Lawal is one of three Artistic Directors working at the BAC as part of Up Next, an initiative designed to elevate visionary artists of colour into leadership roles in UK theatres, developing and showcasing their talents across a range of disciplines. There will also be information released on relaxed performances of Superblackman in the near future.

Over the Christmas period Little Bulb Theatre return to the Grand Hall with Orpheus (Wed 5 Dec – Sun 30 Dec), a brightly original reimagining of the Greek myth inspired by the music of the jazz guitarist Django Reinhardt. Audiences will be transported to 1930s Paris in an opulent evening of song, with a score of original music running alongside Bach, Monteverdi, Edith Piaf and Debussy. Over the same period the BAC will run Return to Elm House (Sat 1 Dec – Sun 30 Dec), an immersive adventure trail exploring the history of Jeanie Nassau Senior, a Wandsworth pioneer whose house stood on the site of the BAC’s Old Town Hall building. Jeanie was a campaigner for welfare rights, a co-founder of the British Red Cross and Britain’s first ever female civil servant. Audience are invited to quest through the front of the building and to collect clues to bring Jeanie’s remarkable story to life.

Rounding off the season is A Grand Night Out (Mon 28 Jan 2019), a variety night curated and compered by Daniel Kitson. With Bridget Christie and Nish Kumar already billed, and with many other exciting artists yet to be announced, this promises to be a rambunctious and celebratory rounding off of an exciting and poignant season for the Battersea Arts Centre.