Theatrical charity, Acting For Others, today announces the fourth annual West End Bake Off will take place on Saturday 19th May. This year will be a rip roaring royal affair as casts from top West End shows swap their wigs for whisks and turn to baking the same day His Royal Highness, Prince Harry is set to marry Meghan Markle.

West End shows come together to compete in the most anticipated theatrical baking competition of the year at The Actor’s Church St Pauls, with judges to be announced at a later date. Last year, 42nd Street tapped their way to the top with their spectacle of cake creations judged by Janie Dee and Arlene Phillips and over £6000 was raised in total which included the online auctions of signed theatre memorabilia and merchandise. 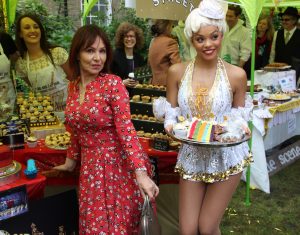 The event is free for members of the public to attend, with judging beginning at 10.30, and the winners will be announced at 11am, when the Bake Off will be declared open for the public to buy cakes, signed posters and mingle with cast and crew from the shows.

West End Bake Off is being held in aid of Acting for Others, a fundraising organisation for 15 UK theatrical and welfare charities.

West End Bake Off is supported by Official London Theatre.