The VAULT Festival is coming to town! From January 24th to March 18th, over three hundred new shows explode across a festival of festivals in their Waterloo home. With new venues, new bars, new food and plenty of surprises, VAULT 2018 is the biggest, fairest platform in London for artists to present innovative, daring work. Here we catch up with Alex Benjamin about his gaming-inspired piece Cotton.

One of the most spectacular collisions of theatre and video games happens in the eSports arenas of games like Dota 2 and League of Legends – thousands of fans cram into massive arenas to see the best players battle it out. The bodies on stage sit motionless at computers, with enormous screens projecting the in-game action above audiences heads and commentators hyping everyone up. And the crowd goes insane! 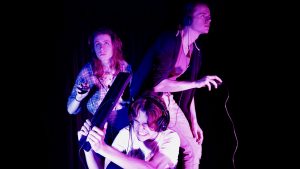 The default direction to go when making a play about eSports would be to use tech and video screens to capture that same spectacle. We know that wasn’t an option for our little fringe four-hander, so we went to capture the intensity of the players’ experience instead. The play I wrote became a whirlwind of thrown keyboards and tangled wires, fuelled by characters’ reliance on caffeine and Adderall, an ADHD drug commonly abused by professional gamers.

I’ve constantly been very aware of the interesting tensions that come from come from telling such a digital story without the use of video screens or flashy tech – the technology that we do have on stage appears just as physical objects, cluttered around the gutted PC towers that we use as our set. Our very immediate kind of fringe theatre subverts the gaudy fakeness of the eSports arena – it feels realer, and that tension is a springboard for a lot of themes that I found really interesting.

So ‘reality’ became one of the key themes of the play – the story lead quite naturally into an exploration of the idea that our world has become simulated and hyper-real. Whatever you think, there’s something unmistakably real that happens when a group of people gather in a tiny theatre to watch actors tell a story. It’s something that you won’t find in even the most immersive video game.

Cotton performs at the Waterloo East Theatre as part of VAULT Festival, 14-18th Feb at 6:05pm with a 3:00pm Matinee on Saturday 17th. Tickets are available for £9.50 from https://vaultfestival.com/whats-on/cotton/, and you can have a sneaky peek at the trailer here.