An ambitious, funny and thought-provoking performance on all that hangs over sex, the female body and seeking oneself out amongst stereotypical projections

Sexy. That elusive adjective. The feeder of all sexual insecurities. The mythologising force which describes not the sexual act but keeps us all alert in the haziness of its mirage. Vanessa Kisuule’s one-woman show debunks and satirises the received projections and anxieties associated with that word, felt by women from early adolescence through to adult life. Sexy is about the individual women swimming amidst the disparate models of sexiness handed down to her, men’s approval or denial of her body and staying afloat while sensing a growing disconnect between herself and these encircling idealisations. It is not so much a dramatic monologue as it is a mise-en-scene of a teenage girl’s bedroom: the audience is recast as the mirror and the stage lights the hairbrush. Cue provocative dancing, twirling and pirouetting and flesh-slapping alongside lip-syncing and a comic, honest commentary. It would be difficult not to empathise with such run-throughs of anxious narcissism and to become absorbed in some of Kisuule’s personal experiences, even for the straight white men in the audience. 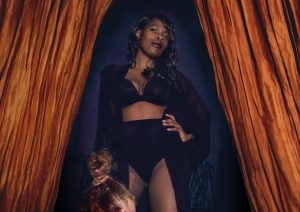 Loosely adopting an autobiographical narrative, Kisuule weaves together a performance built around her body movements, her lingerie attire, anecdotal monologues, spoken word poetry, a film projector and her own occasional voice overs. The result is a show which takes the audience through different idealisations and fetishisations of femininity, from the projections of Marilyn on the silver screen to Kissule’s own re-enactment of Sir-Mix-A-Lot’s “Baby Got Back”. During the latter, she sings a large chunk of the song without any music and then has bits of the music play-and-replay over her resolutely immobile body, thereby regaining agency over a male (and generic) fantasy of black women’s ‘big butts’ and their rhythmic dancing.

While the first half of the show centres on the various images and notions of womanhood the female individual should emulate, the second half sees a much more genuine, expressive side to Kisuule emerge: here, in her capacity as a consummate spoken word poet, she directly addresses and sets out the alarming instances of prejudice and the multi-faceted setbacks faced by women of colour in a white patriarchal world. If the initial skits about sexy women ‘getting stuff’ that most are denied get a bit trivial, then, the more intimate ruminations about masculine power, the
systems of racial oppression and the denouement of taking someone home from a club are well worth the wait.

A strip show turned on its head. A multimedia monologue. An in-depth exploration into sexiness. Vanessa Kisuule’s Sexy is an ambitious, funny and thought-provoking performance on all that hangs over sex, the female body and seeking oneself out amongst stereotypical projections. If you find yourself in dealings with any one of these things, you should head down to CPT to check it out.