Screaming Secrets presents an interesting philosophical dilemma, but comes across as a way of trying to make a lecture in philosophy more accessible.

Rather than the prisoner’s dilemma, Screaming Secrets is the philosopher’s dilemma. When a commitment-shy writer of philosophy, Antonio, discovers that he is terminally ill at his own birthday party, what should he do? Should he tell Monika, the woman he loves and who is desperate to marry him? Should he tell the father, Alessandro, who wants him to take over the family power business – leaks from which are the very thing that has caused his illness? These decisions are made still more difficult by the fact that Monika has been given an advance on a book deal by a lecherous publisher, Hugo, a man who Alessandro tries to pay to take on Antonio’s book. Add to this mix Antonio’s best friend, his doctor, who tries to persuade him of the merits of telling everyone, and a shrewish sister who is tortured by a belief that her father’s infidelity caused their mother’s heart attack and you have a lot to fit into a 90-minute one act play. 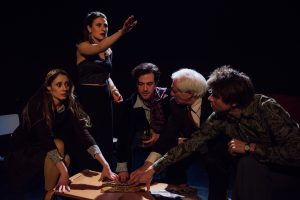 The problem with Screaming Secrets is that it presents just too many opportunities for philosophical discourse. Set in 1975, Alexander Matthews wrote the play in 2001, but it feels like he wrote it for the students that he taught in the 1980s as an aid to theoretical understanding. The dialogue is so laden with weighty views on the meaning of life that it becomes hard for some of the characters, particularly Monica and Antonio, to be viewed as real personalities. Triana Terry does a fine job as Monika, helping us to understand why all the men in the play are besotted with her, and Jack Gordon as Antonio conveys the angst of a man facing his own mortality, but when they discuss, or dismiss, each other’s philosophical views it feels like we are being lectured, making the acting at times self conscious. The more flamboyant characterisations of the sister, Gina (Ilaria Amrogi) and the publisher, Hugo (Theo Devaney) work much better because the actors have scope to ham it up to create greater emphasis; although while Hugo’s quick fire puns start off being entertaining, they ultimately have a flippancy that grates with the general, more esoteric narrative of the play. Ultimately the play does have a tender and touching denouement that helps to justify the rather contrived context, but this is a play that is perhaps best seen as part of a course in philosophy rather than as standalone entertainment.