What makes a good parody? Or, perhaps a better question, what makes a good joke? In 2018, it would be nice to think that we’ve reached the stage where humour doesn’t need to come at the cost of others, and that parody gently mocks without reanimating the worst of an original. 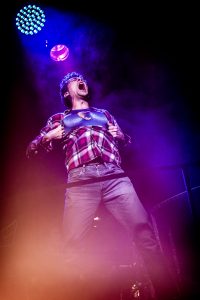 On these grounds, Eugenius, the latest offering at The Other Palace, fails spectacularly. Ben Adams and Chris Wilkins’ musical is about a young boy, Eugene, whose talent in comic book writing removes him from his high school – where, as a boy who prefers superheroes to football, he isn’t hugely popular – and brings him to Hollywood. The show sets itself up as an homage/parody of 1980s comic book culture, but only really succeeds in repeating the overdone statement that eventually the geeks will inherit the earth, and the girl.

The show can barely last five minutes without some form of misogynistic comment, and if there isn’t one of these then it’s probably because the gap has been filled by something homophobic instead. Whilst it seemed at points that this might have been being set up in order to be knocked down – the female lead in Eugene’s comic is literally called ‘Super Hot Lady’, which seemed rife for mockery – the show fails to deliver. Women are reduced to virgins or whores, and even Janey, the female characters whose inherent geekiness had mostly saved her from any scenes in underwear, goes through a Grease-esque transformation before the final scene, so she too can come onstage in nothing but her underwear.

Am I being too harsh? I thought this whilst watching the show. Is it possible to parody eighties geek culture without incorporating the objectification that women faced then? One needs only to think of Carrie Fisher’s slave outfit in Star Wars (the film series that Eugenius repeatedly desperately references in an attempt to show kinship) and the uncomfortable interviews in which she describes men admitting to masturbating over her image to be reminded of how exactly geek culture worked. Indeed, at one particularly tasteless point this seems to be referenced, sidekick Feris tells us that he laminates his comics so they are ‘wipe clean’.

The score, although perhaps a little too familiar, is strong, and the actors do well with the script they have – Liam Forde, making his West End debut as Eugene, has a gorgeous voice, and he leads the ensemble admirably. The band were also impeccable, traversing a range of styles without a note out of place.

Eugenius runs until Saturday 3rd March. Tickets start at £15 and are available from The Other Palace’s website.