This genius retelling does an excellent job of injecting some light-hearted humour into the story, while preserving the essence of this timeless tragedy.

It’s not often that Shakespeare’s Othello is described as laugh-out-loud funny, but there were plenty of humorous moments throughout Ignace Cornelissen’s jovial, fast-paced retelling. Cornelissen’s adaptation, translated by Purni Morell, is the latest in his series of works opening up stories to a younger audience, following on from Henry the Fifth, A Winter’s Taleand The Hunting Lodge, also produced at the Unicorn.

An all-black cast bring Othello into the modern day, with soldiers wielding machine guns instead of swords. But under Ian Nicholson’s direction, the play doesn’t indulge too much in modern references. It’s a timeless story, and it is kept that way. 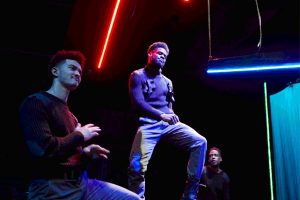 It is a tale of two halves in many ways. A rambunctious, comedic first half which sees Othello drunkenly dancing and mooning over Desdemona on a night out, is followed by a heart-stoppingly dramatic finale. It never feels disjointed, and is surprisingly unrushed for a performance just over an hour long. The story progresses with unceasing foreboding and the final scene brought a total silence over the excitable young audience.

Masculinity, class and pride are the issues that take precedence here. Othello’s performative masculinity in the first half is rattled by both Desdemona’s rebelliousness and Iago’s scheming, unravelling rapidly into thunderous anger and then childlike fear. The play doesn’t shy away from tackling the subject of death, either.  Othello originally flippantly dismisses it as ‘being put in the ground’, only to wonder where people’s thoughts and feeling go when they die as he’s overcome with anguish at the end.

It was also interesting to see Desdemona and Brabantio’s father-daughter relationship take on such prominence. One of the most heart-rending scenes takes place when Brabantio utters ‘the last words’ he’ll ever say to his daughter after her betrayal in marrying Othello. Although it was all wrapped up a little too conveniently on Brabantio’s return, it was an interesting dynamic that often isn’t dwelled on enough in other versions.

Okorie Chukwu dominates the stage as a booming Othello, flicking between charming impishness and terrifying ferocity with ease. His portrayal of the character’s brash confidence coupled with eventually crippling self-doubt is made obvious to the audience but not cliché. Ricky Fearon as Iago similarly perfects a cocky carelessness that eventually develops into pure evil as his plot begins to unfurl.

James Button’s set and costume design is minimalistic, but comes to the foreground in all the right places. The final scene takes place inside a lamplit tent, spotlighting the intense moment and adding a layer of secrecy to the deed.

The ending comes slightly abrupt, and for those familiar with the original story, it is frustrating not to see Iago receive the comeuppance you expect. For a play which stays relatively close to the original plot in many respects, it seems unusual for such an important part of the message to be omitted.

Nevertheless, this genius retelling does an excellent job of injecting some light-hearted humour into the story, while preserving the essence of this timeless tragedy.