A night of subjective philosophing with lashings of humour, but without a huge amount to chew on.

Waterloo – Napoleon couldn’t escpae if he wanted to. So is the thrust of Told By An Idiot’s newet production, transferring to the Arcola Theatre following a spell in seaside Plymouth.

Based on Simon Leys’ The Death of Napolean, the fun counterfactual romp of a story follows the great French emperor who, faking his own death while in exile, tries to get back to Paris to re-establish his rule and once more become the military leader his nation needs. Only, things go awry, and Bonaparte finds that trying to move on from his greatest defeat may be harder than he’d first anticipated. 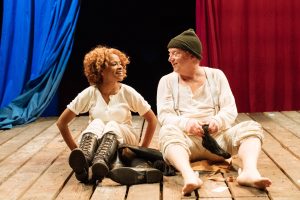 It’s a jovially luscious concept for a show, packed with gleeful anachronism and glib historical treatment entirely in keeping with Told By An Idiot’s house style. Paul Hunter also creates quite a convincing Napolean, all bluster and posture, facial expressions never straying too far from a scowl. The show is packed with clowning fiascos and surreal episodes including University Challenge reenactments and pan-pong (ping-pong with pans… and melons) as the French dictator grapples with his own sense of identity as he deals with a nation believing him to be long gone.

But just as its titular character becomes unsure of himself, so too does the production seem to forget what it wants to be. There are times when Kathryn Hunter ramps up the zany comedy, while other times it is the drama that is meant to go centre stage. The problem is, the clowning can inhibit the storytelling, just as the decision to commit to the storytelling can undermine the comedy. The show feels stuck in a weird limbo. It means, by the supposedly emotionally charged conclusion of the piece, it’s hard to empathize with the aloof general, as we, he and the show aren’t too sure about who he’s actually meant to be.

The real triumphs lie elsewhere. Ayesha Antoine’s multi-rolling as every other character under the sun allows her to create some fantastic personalities going toe-to-toe with Hunter’s Napolean – from spies to melon-sellers to doctors. Beyond that, Michael Vale’s set is essentially one giant seesaw balanced on two discs that create unstable and sloped environments; it only feels apt that a man no longer sure of his place in the world can no longer trust the ground beneath his feet.

It’s a fun 90 minutes, and there are a brace of jokes that definitely tickle the savvy east London crowd, but, compared to the heights of recent shows like My Perfect Mind, there is less to pack an emotional punch. A night of subjective philosophing with lashings of humour, but without a huge amount to chew on.