Review of: Madonna or Whore

A grand night out with a fierce and wonderful amount of anger and determination behind it. 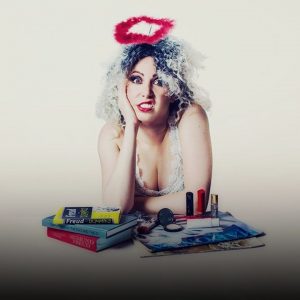 Morgan presents the distinction between Madonna-y women and Whore-y women as an age-old issue. Cycling through various historical and not-quite-so-historical figures (did anyone know that Adam had a first wife called Lilith that had sex with anything that moved, was nicknamed the NightHag and was consequently ejected from Eden after her romping became common knowledge? Me neither, but isn’t it spectacular) the piece has a bit of a dip in the middle but roars back to life at the end. Morgan’s stage persona utterly carries the show, supported by a rather dodgy-accented Tom Moores who dutifully takes on the role of ‘general man’ with great aplomb.

The one question that I have with the generally wonderful piece concerns ‘voting’ cards we’re handed out at the beginning. With a definite tomato/green pepper Ready-Steady-Cook vibe, we’re informed that the Madonna/green peppper side means ‘good’ and the Whore/tomato side means ‘bad’, and then asked to rate the women portrayed onstage as either ‘good’ or ‘bad’ in a way that seems to spectacularly undermine the message of the show. While it might have been meant to be ironic, the satire of the situation isn’t clear enough, and being asked to participate in connecting Whore-bad and Madonna-good leaves a rather bitter taste in the mouth.

However, the heart of the piece is very firmly located in Morgan’s personal experience with oppression, and it is in these sections that the pair really begin to shine. A wonderful, ambling moment about pubic hair is side-splittingly fantastic, and the slightly more intense personal story shared at the end has the audience eating out of Morgan’s hand. It is here where we see how much the show means to both onstage, and here where all the strands of thought are gathered together. Bopping along to Like A Prayer at the end, this is a grand night out with a fierce and wonderful amount of anger and determination behind it.