Review of: Out of Love

Fresh from a national tour, and with a successful run at the Edinburgh Fringe, Out of Love is currently playing its last foreseeable dates at the Orange Tree theatre. A testament to Paines Plough’s ability to find and develop strong and memorable new writing, it showcases the promising talents of playwright Elinor Cook – like Jack Thorne’s Bunny or Tom Morton-Smith’s In Doggerland, Out of Love is doubtless a transitional production that will propel her forward from fringe to larger, deserved projects.

Out of Love focuses on the relationship between two women, as they grow up with each other in a small post-industrial town in Wales. Grace (Katie Elin-Salt) and Lorna (Sally Messham) are like two revolving stars, as Director James Grieves explains – as one explodes, the other implodes, and they are bound together in corresponding cycles of boom and bust. When Lorna’s family is falling apart, Grace seems secure and affable, confident in her ten year old self. But as time progresses, it is she who falls behind, pregnancy replaces university, and Lorna seems to be riding ahead, out of reach. 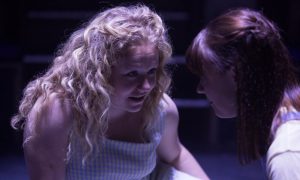 It is sad, but not less worthy of praise, that the nuance and depth of these female characters feels unfamiliar and refreshing. Katie Elin-Salt is a powerhouse of emotion, she has supreme control and strides from despair, to cruelty, to hilarity with accomplished skill. Sally Meesham is a worthy counterpart, and whilst her character is quieter, she gets her own opportunity to demonstrate her talents. Hasan Dixon plays a myriad of supporting male roles, a different one each time he steps on stage. His fluidity and quiet precision serves the story well without stealing focus.

Scenes jump from when the girls were young children in the 80s and 90s, through to their middle age at the present day. Such broken chronology is hardly a radical new staging idea, but is masterfully handled by Cook, with each juxtaposition carefully orchestrated to create poignancy and serve an overarching theme of repetition across human relationships. Crucially, it allows for foreshadowing to glimmer through the layers of story, rather than blind the audience in heavy-handed signposting.

This success can only come with the right guiding hand, someone to keep all the mechanics turning in the same direction –  Paines Plough’s James Grieve, who has a considerable depth of experience with talented emerging writers from nabokov. As he describes, ‘universality of story’ is what they look for in Roundabout shows. Aside from an evocative 80s and 90s soundscape from Dominic Kennedy, the play is almost timeless – as such, the central tenet that relationships repeat through generations is much more effective.

As described in the post show discussion led by Cook, Grieve and the cast, Out of Love is a play of many layers, a symphony, with individual stories intertwining, overcoming and subsiding around each other. The title was taken from an Elena Ferrante quote about how women should never let their guard down, whether out of love or any other cause – they should always be self protective. Self protection is a key theme of the show, but I was left with the overwhelming feeling that it doesn’t serve us as much as we think it does. It is the cracks in our walls that let the light in, just as Grace and Lorna’s fragmented lives ultimately leave more room for each other in their hearts.