Lebensraum, from mime magician Jakop Ahlbom (creator of 2015’s hit Horror, which returned for a season at the Peacock last year), is a quirky clockwork contraption of a show. It is precise, unexpected and never mechanical. It is also an absolute joy to behold when it whirrs into life. It is rare that a reviewer complete forgets that they are watching a production in order to review it – but this is what happened as I watched the two heroes absorbed in the act of creating their breakfast through a complicated system of pulleys and levers.

Lebensraum is inspired by Buster Keaton’s The Scarecrow, and whilst it captures Keaton’s masterful comic and creative attitude it feels just as indebted to the invention of Rube Goldberg. The set is the multi-functional and fantastical home of two inventors – played by Ahlbom and Reinier Schimmel – complete with revolving doors, winch-operated tableware, and beds that transform into pianos. It is apt that Ahlbom calls the set “the fourth character in the story” as it produces as much conflict as the slapstick menage a trois at the heart of Lebensraum. 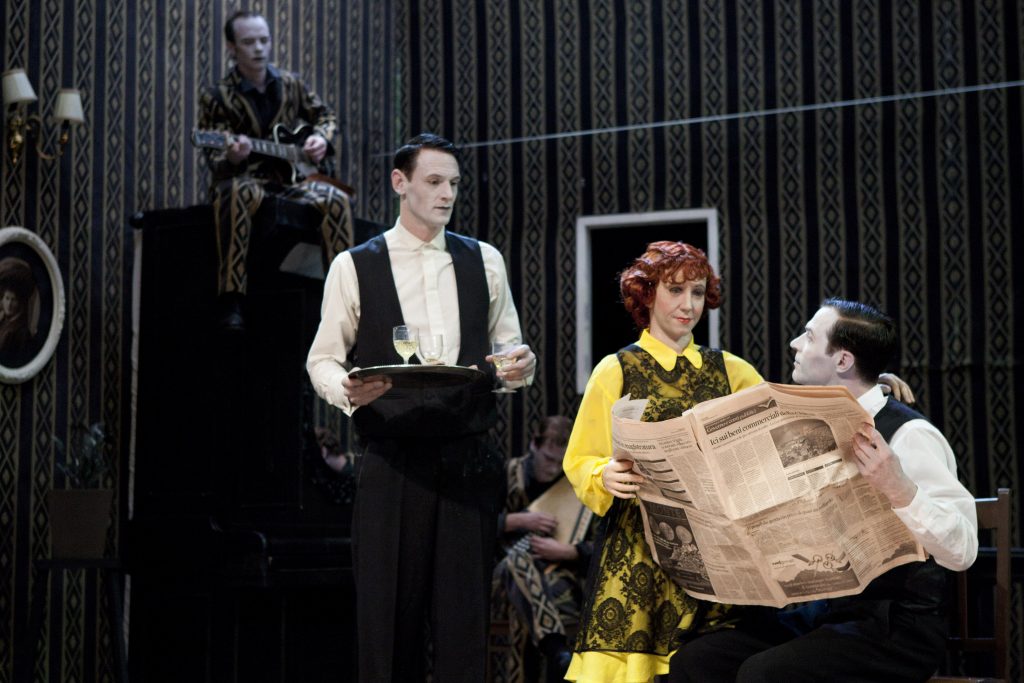 This trio is a pair of inventors and their robotic housekeeper (played by Silke Hundertmark), who they create to bring order to their chaotic household – but who brings more mayhem and madness as she not only disrupts their routine but drives an emotional wedge between the happy co-existence of the couple. The comic and physical skill of each performer is exceptional, inspiring as many gasps as laughs from their audience. That is not to say that the show is limited in its comic invention – in fact, Lebensraum bursts with ideas. Absurd slapstick and illusion-making combine to produce stage effects which in any other world would be impossible. But the impossible is Ahlbom’s territory – a territory which springs from the subconscious to bring us a wallpaper forest, detachable limbs and the (Keaton-inspired) ability to jump through another man’s torso.

If the set is the fourth character in the story, then indie rock band Alamo Race Track (who provide live accompaniment) are the fifth and sixth characters. Clothed in patterned suits that enable them to blend in with the wallpaper, the bring a sweet and melancholy blues commentary to three humanoids’ longing for domestic bliss.

In Lebensaum, there is no doubt that Ahlbom is an extraordinary artist and aesthetic visionary. Time after time in this review I have scrolled down the list of credits to find who is responsible for a particular highlight, only to find Ahlbom’s name. As performer, director and designer he excels in a category I can only think of one other occupying – James Thierrée, the dreamer behind Compagnie du Hanneton. Britain has few of these exceptional theatrical auteurs – and it is these unique oddities that the London International Mime Festival exists to celebrate