A one of a kind homage to a unique man

The Bunker Theatre has been transformed into a dimly lit, Bohemian lounge as audience members are welcomed to sit on cushions or sunken armchairs and listen to a man (Terry Johnson) share his story of his lifelong association with mentor and friend, Ken Campbell (played by Jeremy Stockwell). Johnson narrates the actions, reactions and everything else in-between, bringing Ken back one night only to have a bit of a chat. In this respect, KEN is not so much a play but more of a storytelling, in which Ken interjects Johnson’s story with quips, wit, and mad suggestions. 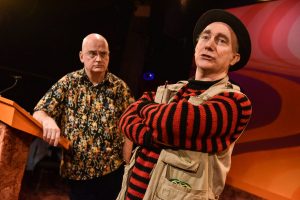 Where KEN really succeeds is in capturing the unique essence of who Ken Campbell was. Stockwell has created a sensitive yet playful portrait, embodying him in a manner that is so specific in detail, with his unruly eyebrows and manic hand gestures, without it ever tipping into an impersonation. Of course this goes hand in hand with Johnson’s detailed accounts of the rehearsal processes, meetings, parties and pub sessions that he shared with Ken in which we are regaled with tales 9 hour plays, giant inflatable whales and a particularly entertaining story involving a postman and a bicycle. These stories leave an essence of who Ken was and are, even in themselves, enough to understand how different Ken was in the world of British theatre and as a human being.

The show is also in some ways a tribute to fringe theatre. The Bunker Theatre is just the perfect location for a show telling on of the origin stories for a lot of contemporary experimental british theatre we know and love today. It is as if Terry’s tales with Ken have come full circle and here they both are again – in a fringe venue, sharing stories, at the forefront of experimental theatre back in the 1970s; back to a time when Johnson had no idea about the wonderfully weird man he was about to accidently meet, and absolutely no idea about how Ken would come to influence him as a person and as an artist.

Anyone who has known someone ineffable in their life, whether that be a mentor, colleague or best friend, will see the beauty in Johnson and Stockwell’s show. It captures the indescribable influence certain people have on our lives in ways we did not even expect. KEN is a one of a kind homage to a truly unique man.