Somewhere A Gunner Fires, the inaugural production from Calvary Theatre, is on this month at the King’s Head. It’s a play about the final months of the first world war, where a number of stories reach their end – perfectly timed for the centenary of the 1918 armistice. We caught up with Chris Born, who’s playing Volker in the show, and found out how they were getting on. 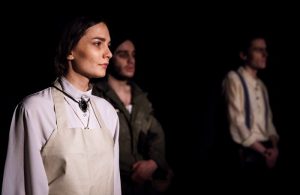 How are you finding preparation for the show?

Very relaxing! Because we’ve done the show before, we’ve all come into rehearsals on a pretty sure footing. All the actors know the characters and the lines inside out so we can start with confidence. It’s also meant that we have the freedom to play around with the show, and suggest new ideas. Tom’s (Stuchfield, writer, director, and performer) nitpicky nature is perfect to shape every detail in the performance, and we have the time to do it – I love it.

With 100 years since the end of WWI this year, there are a lot of events going on to mark the centenary. Have you been to any of them? How are you finding working on the historical aspects of the show?

There are exhibitions at the museum of Greenwich and the IWM that are both incredible. There’s a brilliant little walking tour of some of the parts of London that were most affected during the war. I’ve also been to a few of the events at the National Archives and actually did a bit of research on my great-grandfather’s job during WWI. He lived in the north-east of England, so he worked at the dockyards building and repairing ships throughout the war. Looking at my family history and seeing how it reset my prejudices and assumptions about the war was quite shocking. Investigating the historical aspects of the show, and looking at how we form emotional connections with those aspects, has been one of the most interesting parts of it from the beginning. The most exciting bits of research have been the bits examining individual, intimate stories rather than the bigger picture. Tom (the writer/director) lent me a wonderful book called ‘The White War’ which is full of diary extracts, personal photos and tons of startling memories.

And off the back of that, how are you keeping the stories relevant to a 2018 audience?

I think we eschew any pitfalls into sentimentality, which is what can make a show about this subject matter feel dated, in my opinion. Tom has gone out of his way to present the unlikeable qualities of each character as well as their admirable ones, and the characters seem fully fleshed and more tragic as a result. We don’t idolize these characters and so we can imagine and respect them more. He has also very cleverly woven in objects and ideas that are repeated throughout the show, which lets the audience engage with and understand these characters, and draw parallels with their own lives. The style of the whole show, as well, makes it very appealing for a contemporary audience. Much of the play is written like a film, full of fast-paced dialogue and incredibly vivid scenes, and the audience can easily get swept up in the energy and the brutal movement of it.

I’ve actually worked with the show for almost five years, since we first did it at university in 2013. Since then, Tom has (luckily) brought me along for the ride. His knowledge and passion about the First World War is staggering, and he has continually expanded that research as the play has developed. So ask him questions in the bar afterwards! Oh, and bring your ear plugs.

Somewhere A Gunner Fires is at the King’s Head until 24th February. Tickets are available here.