Imagine a slightly bizarre combination of a whodunnit, thespian romp, political intrigue and lots of sex everywhere. There are ghosts, hidden French refugees, Sir Walter Raleigh in for the chop, Shakespeare wearing a smock and broken hearts liberally strewn around the stage. It’s a weird one.

The general plot outline is actually not that much simpler. James I, King of England, is staying in a mansion in the countryside while the plague ravages the street of London. Meanwhile, his hostess is determined to convince him to reconsider his decision to sentence her lover, Sir Walter Raleigh, to death – so she invites Shakespeare and his troupe of merry men around to put on a bit of As You Like It to change the king’s mind. Cue in-fighting, lime-throwing, a talking dog and we’re still only an hour in. Cor blimey. 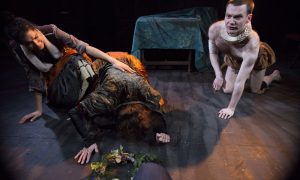 There are, however, some gorgeous performances. James King is a wonderfully ridiculous dog (ironically named ‘Chop’), running around panting in a ruff and some questionable trousers in the most convincing canine fashion. Tom Vanson was quietly heart-breaking as the blustering James I, with Thomas Bird carrying the emotional part of the show on his shoulders as the blinded Robbie. Curiously, Ian Hallard (while portraying a suitably conflicted Shakespeare) isn’t really featured much at all – a rather side-lined figure banished to the woods to masturbate in a smock and otherwise stride around the stage defending As You Like It without a huge amount of plot influence. One wonders whether all these characters were strictly necessary, and whether the piece might have become a bit sharper and clearer had a couple of the subplots been cut and more time been taken to develop pivotal scenes.

Important information seems to have gone amiss, and there are some rather puzzling gaps in the piece. One would think a ‘royal command’ deciding who plays the main part in whatever show is being produced for the King would have been a rather common occurrence, totally undermining Alex’s huff when Robbie gets pushed forward for the lead. Why there are French dissidents hidden in the walls is anyone’s guess, and a love triangle between the maid and two of the actors rather fizzles out towards the end. It’s a backstabbing, political whirlwind of a world, rumbling along nicely with echoes of chaos and lunacy but there isn’t quite enough time for the piece to settle – it’s telling that Foul Pages really comes into its own in the latter half, when scenes are slightly longer and we’re given a little more time to figure out just what the hell is going on.