Review of: The Flying Lovers of Vitebsk

Beautifully produced and well acted, but it lacks anything unique to set it apart from the rest of the Kneehigh oeuvre.

Kneehigh resurrect their award-winning biographical show about Marc Chagall and his wife Bella. First performed in 1992 under the direction of Emma Rise, it’s easy to see why Kneehigh have chosen to continue this piece year after year . The two leads are charming, the music is consistently wonderful, and the physical choreography is often intensely impressive (despite there being no flying involved, to this reviewer’s disappointment). The actors are slightly clownish, but nonetheless manage to continuelly portray an earnest picture of love- which resonates perfectly with Chagall’s expressionistic and romantic painting style. 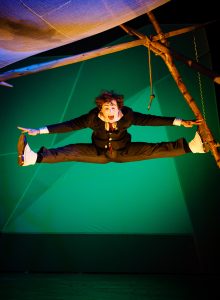 Starting with their meeting in Vitebsk as youngsters, The Flying Lovers of Vitebsk follows Bella and Marc’s lasting romance through the First World War and Russian Revolution to old age. The lyrical movement sections retain their otherworldly beauty, the set splashes with pinks, oranges and aquamarines – the outward gorgeousness of the piece is definitely alluring. However, a sense remains that this is rather ‘Kneehigh-by-numbers’. The issue with continuing a piece that has been around for more than 20 years is, rather inevitably, the company progresses to astound and amaze while that piece stays very much as a representation of their beginning. All the different elements that intertwine to become The Flying Lovers of Vitebsk have been picked up and extended in other productions, leaving Flying Lovers itself to become less and less special.

This is not to say the piece isn’t well done, but if you’ve seen a Kneehigh show before, there is likely nothing in this that will surprise you. Another flaw with the two-person nature of the piece is the difficulty in creating any sense of jeopardy. Having lived through the start of World War 1 and the Russian revolution, there is never any overriding sense of terror, the entire period boiled down to a couple of mentions of being hungry. Vitebsk was then largely destroyed in WW2 and most of the Jews massacred – this is barely dwelt upon.

Overall, it’s a story of two characters growing old together; their young love, their arguments, their reminiscing about their young love. It’s beautifully produced and well acted, but it perhaps lacks anything unique to set it apart from the rest of the Kneehigh oeuvre.