Review of: Evros The River Crossing

An engaging ensemble production that meditates on the refugee crisis with powerful song and some physical elements.

A Syrian refugee bobs in the water holding two babies in her arms waiting to be rescued. We do not see the babies, or the water, or the boat in Seemia Theatre’s production of Evros The Crossing River, but the moment is still incredibly powerful and moving. This is because we have followed the story of Doaa for 50 minutes, interspersed with tales of others in a crisis of flight, and we have bonded with this bright, feisty girl with hopes for a better future. 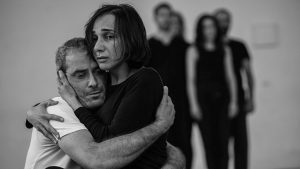 Evros, which made its first appearance at the Camden Fringe, is now part of the Vaults festival in Waterloo. The damp, dripping railway arch of the Cavern, with the trains thundering overhead, is a fitting venue for this moody, emotive piece of theatre. The international cast are committed in their storytelling and although there are a few nice moments of choreography, it is when the performers sing that the ensemble really comes together. The little scenes are like vignettes that accumulate to create a mood and emotion rather than a clear through-line of plot. Children are asked to dip their hands in an imaginary bag of treats when their mother runs out of eggs to make an omelette, a boy loses his sister in a mortar attack and let’s out a silent scream, a woman runs to a hospital after an incident requesting heart pills and finding a moment in the chaos to fall in love with the young doctor. A particularly powerful scene is of officials barking orders to “sit down”, “stand up”, “turn around”, “remove that item”, these moments work better than the naturalistic scenes, which often feel incomplete or in need of tighter scripting.

Performances are strong, with Charlotte Slater and Cheryl Prince in particular standing out for their truthful portrayals. Seemia call themselves an “emerging international theatre ensemble” and it will be interesting to see where and how they develop this work.