Review of: The Drill at Battersea Arts Centre

An inspired and conceptually fresh new show from Breach Theatre

‘On the night, when the curtain goes up, you want it to go well’. A sentiment anyone in the theatre industry would agree with, but not perhaps, the sort of thing you’d expect to hear from a high-risk scenario drill supervisor, those tasked with preparing us for terrorist attacks, or dealing with armed assailants, or stemming the blood of an open wound. Deal with the imagined scenario, the theory goes, and you’ll know what to do when it occurs in real life.

Such is the central conceit at the heart of Breach Theatre’s third show, debuting at Battersea Arts Centre before touring across the country. The three performers, Luke Lampard, Amarnah Amuludun and Ellice Stevens, emerge into the space – a plain, wooden floored area, (incidentally the same ‘rehearsal’ space Theatre Ad Infinitum used last year).  The trio hovers around a central crash mat, explaining, candidly, that they’re going to show us these drills in action, exploring how effective they are and, fundamentally, demonstrating that they’re just another form of roleplay.

And the performers do play roles, well, we think they do. Wedged between these drills are theoretical scenarios, narratives, backstories. Lampard, or his character, fantasises about a former boyfriend, Amuludun, a dancer, fantasising about life with a stable career, while Stevens is plagued with fantasies about the world ending and rushing into a family life. Imagined pasts, imagined presents and imagined futures, weaved for us on stage. But if theatre is imagined storytelling, then how is that any different to what these emergency scenarios are? For those running these drills, practising these scenarios, imagination is a means to an end, a way of optimising your performance when it comes to the crunch. Theatre is the same thing – we rely on our own experiences, we work with the script, we go through the movements as choreographed. Taking an AK-47 out of someone’s hand and performing 4 dance moves can look cannily similar. 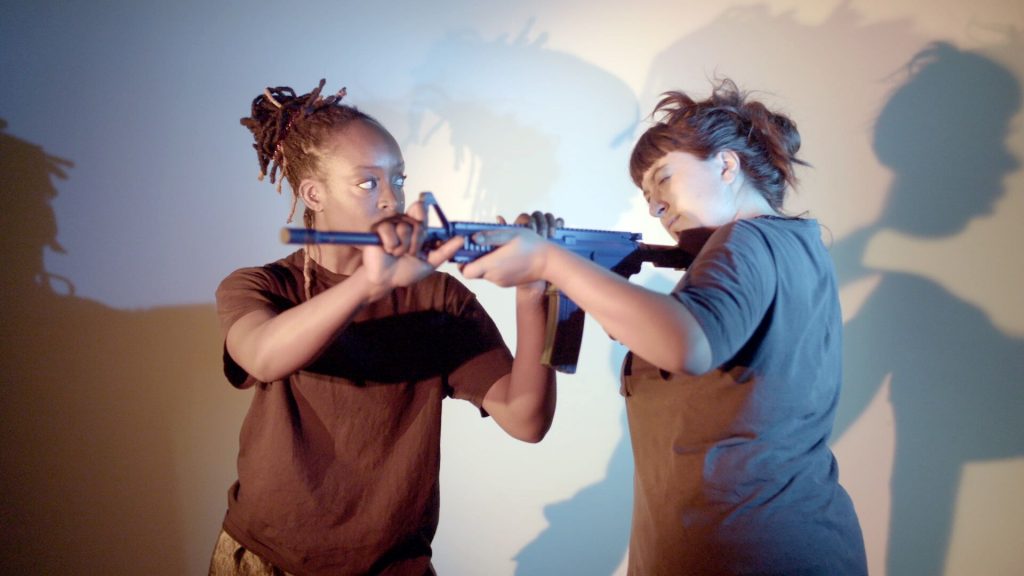 Even as the experts say it, we are shown it. Displayed in short, artistically filmed sections (all low depth of field and 60 frames per second) the cast going through the drill processes, projected onto two oppressive screens hugging the far corners of the committee room. The trio practices their disarming manoeuvres, how to calm a situation, or how to discover a pipe bomb.

It’s all very neat and well planned – making some important points about national attitudes towards terror and a state on the edge of panic. At what point does planning for a threat, especially one that you can’t predict or prevent, simply become paranoia?

So far, so form-busting – the sort of innovative performance that Breach Theatre has come to be renowned for. The thing is, after setting up the concept the show doesn’t really know where to go next. It seems to ripple between its meta-theatrical levels – sometimes the performers are characters, sometimes they’re performing the scenarios, sometimes they’re simply ‘themselves’. At one point we’re back in Battersea, the next we’re off again into a hypothetical scenario. It hops back and forth, proving its ingenuity but never progressing beyond it.

It comes across as all perfunctory – a handholding exercise through a meaty and weighty topic. Even as the play tries to push itself back into the room, it never really feels immediate or pressing. A theoretical exercise rather than an intriguing piece of theatre – putative, yes, but rarely piquant.