Exploration of gaming and gamers with great potential, but ultimately fails to take flight

Gaming is a huge part of entertainment culture, but one that is seen as rather low-down in the ‘hierarchy’ that often accompanies the arts industry. Cotton offers audiences a sneak peek into the lives of three professional gamers, and the clash between their lives both in the virtual fantasy of League of Legends and the rather less exciting ‘real world’ after the team lose a vital tournament and have to disband. 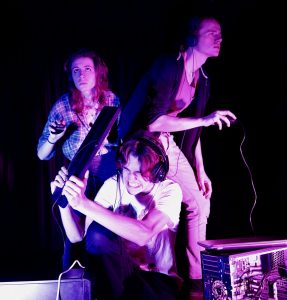 The cast are rather young, but there’s some wonderful raw potential. Will Penhey is particularly good as elder brother Glen, with Ben Mallett and Franci Donovan-Brady coping well with a slightly underworked script as the self-obsessed Kieran and Tammi, the only female in this ostensibly male world. Penhey manages to make the audience empathize with what is actually a rather unpleasant character, letting us see the full extent of Glen’s vulnerability when disconnected from the online world, thereby evoking our sympathy instead of our judgement. Mallet and Donovan-Brady don’t fare quite as well – Kieran especially seems like an intensely difficult person to make sympathetic, not helped by a rather glaring plot hole centring around his character. If he’s so keen to throw the game, forcing everyone to live in the ‘real’ world, then why are 90% of his lines about rejecting this reality and submerging himself back into his online persona? The conflict could have been an interesting one to explore, but with not enough stage time Kieran quickly become very self-contradictive in a way that only serves to frustrate.

It’s a story that, while interesting, ultimately doesn’t really go anywhere. The fascinating discussion surrounding the limits of reality, and whether the world we can physically feel around us can be called any more ‘real’ than the world which exists in virtual space is touched upon, but never developed to any sort of satisfactory depth. However, there’s a wonderful nuanced look at the stresses of family life, and the most heart-wrenching moments are the struggles between father and his part-adult/part-toddler sons. Kieran’s been hiding in his room for weeks, leeching off his dad while streaming academic arguments about the limits of this so-called ‘reality’ to around 6000 online followers. His dad comes in, has a chat, ends up kicking him out. We’re brutally aware of both the father’s emotional capabilities and ‘real-world’ stresses and the panic Kieran feels when forced to face things like tax and income – and his consequent rejection of any responsibilities. Some wonderfully developed moments, but surrounded by a concept that ultimately fails to take flight.