Review of: The Captive Queen

As a twenty-first century theatre-going society, we’re not well adapted to John Dryden. Despite the fact his plays are very slightly closer to us temporally than Shakespeare’s, the lack of contact we have with Restoration drama makes the language feel less accessible, and the heroic couplets that Dryden uses in Aureng-zebe (his title for The Captive Queen) have a patter to them that we’ve gleaned from the way Shakespeare uses them. This play itself was last produced around three hundred years ago, which serves to show just how unfamiliar it is to us. A brave choice, then, and particularly given the pressure on this production to perform well: as well as being one of the last pieces programmed at the Globe by Emma Rice, it is also the swan song of director-performer Barrie Rutter, who is leaving Northern Broadsides after The Captive Queen. 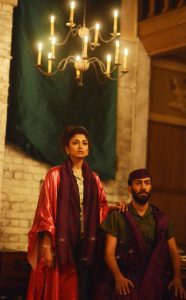 Naeem Hayat as Aurangzeb and Neerja Naik as Indamora. Photo by Nobby Clark

Does it hold up? Gloriously so. Dryden’s play is, fittingly, about generations passing on the baton above much else. The ageing emperor (played with both heart and humour by Rutter) is torn between his pride of his eldest son, and his lust for this son’s wife. More sons appear, and more people keep falling in love with Indamora (a slightly unconvincing plot point soothed by Neerja Naik’s excellent performance) and even Aureng-zebe himself (whose glory and shame is managed wonderfully by Naeem Hayat). Rutter has transferred the action from Dryden’s exotic Agra to a mill in the north of England.

The entire show is vibrant and charming, a perfect fit in the difficult space of the Sam Wanamaker. Jessica Worrall’s design is beautiful, plain white brick walls and blue boiler suits set off by coloured cloth on both set and actor. The show meshes together the bright fabrics of a dyeing room and the music in a factory floor that composer Niraj Chag makes seem obvious, with the soft candlelight and the intimacy of actors, audience, and space. Although the plot is ostensibly about war, we spend most of our time watching a family argument. This above anything else benefits from the space – while the world rages around us, we, the hyper visible audience, are inside an intimate moment where nothing else matters.

There are odd elements to The Captive Queen, and they seem to come from both the production and the play itself. The combination of heroic couplets and a large number of soliloquies that take place when other actors are on stage creates a strange pace, and with the majority of action happening off stage as well, the play can lag. In addition to this, while factory setting allows for not only brilliant visuals, but also makes sense of Northern accents on the Globe’s stage, it doesn’t really add anything to the text, and if held up to too much scrutiny would probably fall down.

And yet overall, the production is nothing less than triumphant. Expertly balancing the meta-theatricality of the setting and the play, Rutter and his company have succeeded in a creation that is nothing but heart.

The Captive Queen is on at the Sam Wanamaker Playhouse until Sunday 4th March. Tickets start at £10 and are available here.