Review of: Burkas and Bacon Butties

A piece with a lot of potential, but suffering from some questionable conceptual decisions.

An ‘East meets Wigan’ comedy, Burkas and Bacon Butties explores the struggle of an Egyptian father Ashraf trying to cope with his now grown-up half English daughter Shazia whilst juggling work, a new wife and pressure from the Muslim community to do the right thing. A really strong script by Shamia Chalabi and Sarah Henley followed up with superb comic timing means that the show is, simply put, hilarious. I don’t think more than two minutes went by without a laugh, and I don’t mean a little titter – I’m talking about at least 99% of the audience having a proper belly-based chuckle. 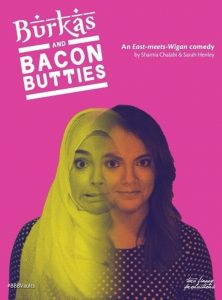 Tom Rodgers has created a beautiful cosy atmosphere with chintzy armchairs, a reading lamp and a large fern, even going so far as to create the screen between driver and passengers out of white net curtains. Building the world of one man’s taxi cab out of living room objects instils a strong sense of home, and makes it far more traumatic when the taxi is vandalized during a racist attack on Ashraf. The most impressive touch to the taxi decorations are colour changing fairy lights, adorning the edge of the driver’s seat and turned on for the Christmas portion of the play.

Unfortunately, this world of the taxi cab is shattered by poorly implemented sound effects. The team attempts to use foley to create sounds like doors opening and closing and engines starting, but only succeeding for about a third of the time – the result being very jarring from an audience perspective, drawing spectators out of the narrative to question the infrequent and unexpected bangs and crashes.

Most of the secondary characters are also sat on stage for the majority of the show without anything really to do. It seems as if their primary use is to be involved in phone calls between themselves and Ashraf – bringing the other characters in the story to life in the small world of a Wigan taxi. Yet even though the actors are sat there they’re often not used them to participate in the other half of the call; a missed opportunity to develop other sections of the narrative. Occasionally they spring alive in an ensemble manner to show the passing of time, dressing the set with tinsel at Christmas, flowers for spring and paper cranes for the daughters wedding at the end of the play etc. While academically a nice idea, the transitions tended towards the lacklustre – one tends to wonder whether this might stem from the frustration the actors must have been feeling through lack of occupation, and whether there was any particular point for them to be sat there for the majority of the show.This play has a lot of potential but needs some bold choices to be made and followed through for some of the concepts to be successful.