An unwieldy, unhelpfully dystopic discussion around consent and sex

The signs are promising when walking into the Cavern at VAULT Festival. A complete blackout, marked only by a green digital clock and Jessica’s phone torch as she tiptoes around the room, having woken up next to a strange man and with very few memories of the night before. But this is before both characters have fully woken and the show gets mired in swathes of rather unwieldy dialogue that seems to proclaim ‘I am being deep’ every five minutes before moving on to another subject. 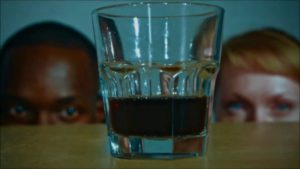 The general gist of the show is that Jessica has woken up in bed with Murray. Neither can remember the night before – Jess skived off her father’s funeral after years of him being emotionally absent from their relationship and Murray was rejected by his lady love after he revealed his feelings for her right after she came out of a six year relationship. They both went out, drank alcohol – cue 6 hours later, clothes flung all over the room and no more memories

There are glimmers of potential, but Blackout seems more concerned with shuttling through them at the speed on light rather than lingering and exploring any themes in details. Bits and pieces are flung in all directions and never elucidated upon –  Murray finds a number of dismembered dolls in Jessica’s bag, who tearfully gathers them up and explains she likes to give them a home to help fix them. Back the bag they go, and are consequently never mentioned again. The metaphor is the exact opposite of subtle – it’s clear that Gavin J Innes has had a large amount of ideas to put into the piece, but as of yet has not managed to distil them down to the essential.

However, it feels like the main issue of the play is meant to be the discussion of consent. Jessica freaks out when she realizes she can’t remember anything, and obviously suspects Murray of drugging her and carrying back to his flat. Why the hell she stays in the room for 50 minutes after this suspicion comes to light is anyone’s guess, but it signals the start of some rather unwieldy discussions about sex, ‘being the good guy’, ‘being the bad guy’. Feminism 101 is spun in front of ours with no nuance in the conversation whatsoever – apparently Murray drinking some water to prove he didn’t spike it is a ‘sweet gesture’.

With the confusion of the script, it is clear both actors are giving their best. Ashley Byam ekes out some comedic moments as Murray, but is obviously more at home on a larger stage – charting all the bizarre twists and turns of his character with a gritting commitment, it is clear he’s more accustomed to an auditorium of 600 rather than 60. Carrie Hill deals well with the pace of her confessions as the ‘broken’ Jessica, and it is wonderful to hear a non-RP voice represented on London stages.

And then the s**t hits the fan and both characters realize that they don’t know the room they are in and the door is locked! The play does an abrupt about turn into dystopic fiction – there is a mysterious figure who takes pictures of them while they are sleeping, and it comes to light that, due to the number of pictures, this memory-loss situation has happened many times before. Cue lights down and a rather bemused audience heading off to the bar. Blackout has the potential to be interesting, but the piece needs to decide what it wants to be before attempting to make its point.