Confusing blend of monologues just about saved by a striking design and spectacular acting.

Ridley’s gained notoriety for producing plays that are uncompromising in their brutality and brazen in their emotion. Angry, though, feels slightly confused as to what it wants to be and exactly what sort of point it wants to make – a collection of six very different monologues of varying quality packaged up and thrust unceremoniously in our faces. 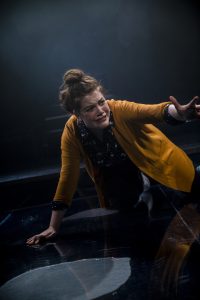 Tyrone Huntley and Georgie Henley try their hardest with some very difficult writing; Henley in particular is a tour-de-force, dragging humanity out of stilted situations with a wit and an intelligence that stays visible throughout. Her American housewife promising to banish the words ‘hesitate’ and ‘ponder’ from her vocabulary makes what could be a self-obsessively ‘clever’ monologue (Okay) just about accessible and understandable for a rather bemused audience, before trying her hardest to push the ridiculously underdeveloped Dancing towards a satisfying conclusion. The fact that there are severed heads on the dancefloor, and that this is not an unusual occurrence is a wonderful start to a monologue, but it fizzles out with a sad whimper despite Henley’s masterful comedic timing and judgement.

Huntley also grapples with speeches that push him towards the infuriatingly one-note; screaming at the audience about Bambi for ten minutes with no sense of character development is tricky at the best of times, and Now is just plain confusing; rocketing from an exploded building to an interrogation cell to a spaceship to a black hole in a piece that feels like a postmodern experiment in need of a couple of redrafts. However, the longer Bloodshot is where Huntley’s true talents are released – weaving a tale of a forbidden sexual experience surrounded by a brass band and ducks, Huntley meanders along the diversions of the tale with a gentle arrogance that is thrilling to watch.

And then. And then we hit Air and finally, finally Ridley shows his true colours and we glimpse a spark of method underneath the madness (only a spark). Henley is mouth-gapingly spectacular in this heart-breaking tale of love among dusty hardbacks, ending up her caught underwater in a sinking ship, flashing back to memories of lighter times and counting down to her last breath. It’s a crushing juxtaposition of the mundanity of youth, rose-tinted childhood memories against the irreconcilable confusion of war, with the dust and stenches of death.

Despite the dystopic gloriousness of Air, one wonders what the point of the individual six plays were. The vast majority felt like experiments rather than a unified piece of work, and it seems very bizarre putting the most hard-hitting story right at the end – I walked out of the theatre with the preceding five almost completely forgotten. The set is beautiful, both actors penned in by bars of light, costume design and direction clever, but a unifying factor is missing. One also wonders why Ridley felt the need to swap the monologues around every night – none of the pieces are really that concerned with gender, and it reeks of a gimmick. Some beautiful turns of phrase and explosive acting from both rising stars, but ultimately Angry fails to hit the mark.