An aesthetically beautiful show by physical theatre masters Gecko, but with an infuriatingly simplistic message.

Gecko have long since been instrumental in curating a mesmerising style of physical theatre that reacts to every beat in its music, every dim and flicker of the lights. This style itself has been enough to lift it from its beginnings in 2001 to its current incarnation of fully-fledged touring company with an ardent fanbase. However, sadly, its newest offering of The Wedding shows very little development from the company’s previous pieces – providing an aesthetically beautiful show (as ever) but with a rather simplistic, generalizing message beneath it. 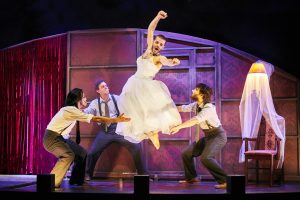 The Wedding focusses on the variety of things we marry our lives to. Offices, alcohol, rebellion are all touched upon, but painted with a brush so infuriatingly large that any personalities that might be attached to individual characters fade away, leaving a confusingly obvious mix of metaphors and symbolism. A character barrels into the onstage world down a slide with golden trousers; he is then presented with a similarly shining jacket and sent straight to a huge table laden with food and wine that looms over the rest of the stage. All the other characters don’t have golden trousers and as such are relegated to the stage surface. Subtle it is not, and the broadness of these assumptions stayed infuriatingly obvious throughout the piece.

The most successful arc is that of an office worker and his wife – he’s haunted by briefcases, phones, ties that bind him to the corporate environment he outwardly seems to thrive in, whereas she obviously sees these objects as a fully necessary part of his personality, of the man she fell in love with. He fights against wine and beer bottles that dance around him, teasing him, the only way he knows of coping with the mundanity of his corporate world. But then to this a family of refugees is added (potentially as a way of creating some stakes into the piece), and a ‘rebel’ wearing a yellow flower – all useful in terms of portraying contrasting lives, but borderline aggressively non-personal, fulfilling functions in the plot rather than showing a nuanced and detailed look at the troubles that they face.

There is also something hugely frustrating about seeing a show that has the end message of ‘everything will be better if we come together and are nice to each other’ – especially from a company that has in the past created delicate and nuanced work. An end ‘celebration’ sequence was far too long without adding anything new or creating any more facets to the piece, and just seemed a grand example of bludgeoning the audience with a self-congratulatory message about human interaction. Beautiful, yes, absolutely choreographically stunning, but with a self-satisfaction that leaves one with a bitter taste.

These flaws do not, however, detract from the beauty of the piece. As ever, Gecko’s style pulses through every phrase, every beat, creating a gorgeous whirlwind of movement that whisks the audience into its shady world. I’ve long been an ardent Gecko admirer, Institute from a couple of years ago remains a pivotal show in my appreciation of theatre and in my realization of the myriad of ways to tell a story onstage. There is no doubt that Gecko know their medium extraordinarily well, and have the most wonderful way of sculpting narrative. Sadly though, and especially in comparison to the rich and detailed tapestry of past shows, The Wedding is a disappointing outlier.