Review of: A Robot in Human Skin

A first person narrative about severe anxiety, told by a gifted storyteller and comedian.

A Robot in Human Skin is an achingly endearing and earnest solo-show about learning to cope with anxiety. From comedian and performer Nicole Henrikson, whose debut theatre show Makin’ It Rain was nominated for a Fringe World ‘Best Theatre’ award, this latest offering is a vulnerable, sweetly-funny exploration of living with mental health issues.  This is important subject matter, but A Robot in Human Skin proves it can still be wonderfully funny and refreshing. 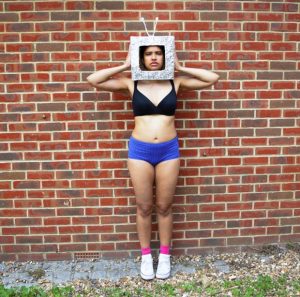 Conceived and directed by Nicole herself, she exudes confidence from the start, welcoming audience members and chatting through her preset. But, as the show progresses, we are carefully led into her world of crippling anxiety. This is cleverly scaled up from discussing the everyday worries we all face – rehearsing coffee orders, for example – to the realities of living with a condition that can stop you sleeping or working.

It’s a simply designed show, with a few home made props, which allows Nicole’s engaging expressiveness to shine. Despite wearing a restrictive robot headpiece, her physical communication is as revealing and authentic to her story, as her original writing.

I don’t feel like I have particularly high anxiety levels myself, but as the show progressed, I racked up a lot of identifiable moments. It started to feel like her robot antennae were picking up on secret quirks I always thought fairly rare to me. This is the magic of A Robot in Human Skin – Nicole creates such an atmosphere of openness, that its a hugely cathartic experience for anyone who’s had any similar experiences. She is such a gifted storyteller, and I’ve never had more fun thinking about mental health.

As such, I do worry how relevant it would feel to the lucky people who don’t experience these problems, or have close friends or family who do. Equally, if you were currently experiencing high anxiety levels, it could be difficult to listen to Nicole’s experiences of overcoming her problems – making you worry you are even more of a failure for not being as positive or creative. Furthermore, whilst the show is typically very well paced, it drops a bit of energy during the 4th ‘chapter’, and might benefit from more acceleration into the concluding section.

A Robot in Human Skin has one remaining performance at 7.25pm on Saturday 27 January at Vault Festival 2018. Tickets can be purchased here.

CAST AND CREATIVE
Written, directed and performed by Nicole Henrikson