Review of: Monster by Worklight Theatre

A powerful and timely exploration of masculinity in crisis, and a great start to the 2018 programme for Vault Fest audiences.

I wouldn’t normally put Mike Tyson and Elizabethan English together, but Joe Sellman-Leava’s Monster leaves me convinced that they’re a perfect match. A rollercoaster of characters, narratives and meta-structure, Joe uses verbatim speech as well as his own original voice (and the old play-within-a-play device) to explore male violence and its systemic nature. His work is a powerful and timely exploration of masculinity in crisis, and a great start to the Vault Festival 2018 programme.

Monster explores how male violence is still endemic, and how many of us delude ourselves that we are not part of the problem. The central storyline follows young actor ‘Joe’ struggle to connect with his abusive character in rehearsals, whilst negotiating the first year of a relationship. Intercut commentaries on domestic abuse from Patrick Stewart’s 2009 campaign, and quotes glorifying violence and female objectification from Mike Tyson, throw Joe’s journey of self discovery into sharp relief. 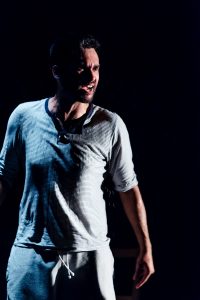 Joe races through his one-man show with enviable energy, precision and skill. His impressions of Patrick Stewart talking about his abusive father, and Mike Tyson on his rape sentence and relationships with violence and women, are eerily accurate, without detracting from the power of the words themselves. Sam Hollis-Pack’s directional lighting design follows Joe’s transitions in character, and bring drama to its climactic ending, without overwhelming the small playing space.

This show is a masterclass of theatremaking. Its parallel narrative structures, powerful changes of pace driven forward by Joe and director Yaz Al-Shaater, and careful balance of dark and light moments, make for a brilliantly intense hour. Having evolved over the course of 8 years, Joe’s foresight has kept it relevant through the accelerations in public gender discourse via MeToo and celebrity cases of domestic violence. Engaging without preaching, this show has the potential to be a strong contribution to the solution – when performed on tour, accompanying workshops for young men explore issues of anger and emotional choice (read more about this in our recent interview with Joe here).

Monster has a lot of promising talent behind it – writer and performer Joe is a graduate of the Soho Theatre Young Company’s Writers’ Lab and Fringe First winner with his play Labels (also at Vault Festival), whilst Yaz Al-Shaater has just finished the Young Vic’s Jerwood Assistant Director scheme. The piece benefited from support from The Old Vic, among other organisations. With its polish and tight structure, is a shining example of how new-writing on the fringe can benefit from proper funding and in-kind support.

Monster continues its run at Vault Festival 2018 until 28 January. It is suitable for ages 15+. Tickets can be purchased online here.