Moving fable of an artistic and potentially philosophical value

According to the simplest definition, tesseract is a cube inside another cube (provided by the Collins Dictionary). Young, internationally trained circus artist Nacho Flores brings a rather fantastical character story to the welcoming Jackson’s Lane Theatre, a multidimensional web of lives and dreams, struggles and stunts, allegory and high-rising endeavours. 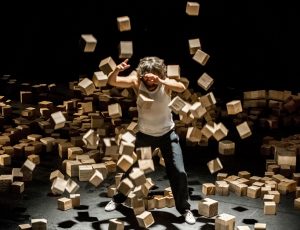 The piece takes place in a world owned by doddering wooden cubes that behave as if alive, forcing their victim to go about his daily business while balancing on blocks that quite literally fall from under his feet. Even the most mudane tasks like watering a plant is a dangerous challenge since you don’t know when you will find yourself in the most terrifying position high above the ground. This, however, doesn’t mean that Flores was just there to show off his balancing skills. His character was after all, a comparatively normal man apparently stuck in this eerie world that made his life a nightmare. Bewildered by the constant surprises, moments of relief came when he succumbed to this playground in brief moments of impish joy. The fact that he loved these wooden objects was undeniable, often looking at them with endearment and taking a childish pleasure in constructing them into shapes when safely on the ground. At the most beguiling moment of the evening, the captive of this strange reality was even startled by the wooden cubes coming alive to become a seemingly mobile little person, becoming his much-needed companion for a precious few minutes. This brief encounter ended quickly and the perils and dangers of pervasive instabilities came back with new challenges.

Flores didn’t forget about the human necessity to escape the world of dreams and nightmares. In a mesmerizing climax, he combined his comic talents and imagination by letting his character climb the volatile set of stairs, enhanced with gorgeous some visual and sound effects.

It was easy to succumb to the magic created as it provided a self-contained reality. The performance, with gripping but simple and nostalgic music by Alessandro Angius, seemed to be a parable about life itself, with all the little joys and struggles and wooden cubes falling from under our feet when we least expect it. In fact, one could interpret the main character as an artist himself, a slave to his artistic products- yes, a source of joy but, (as any artistic form) requiring extremely hard work and studded with failures and disappointments. Tesseract showed itself capable of creating a moving fable of an artistic and perhaps philosophical value.