Having started out at the Edinburgh Fringe Sweet Venues last year, SiX might seem like a bit of a rags to riches tale – picked up by Kenny Wax when functioning under the Cambridge Musical Theatre Society and now having its first professional run with Lotte Wakeham as director and a cast of musical theatre aficionados. A banging piece about the six erstwhile wives of Henry the Eighth, it has helpfully discarded anything that might resemble a plot (the six wives decide to form a girl band is all you need to know on this one) and focusses instead on being a grand smorgasbord of catchy tunes and inventive lyrics by young duo Lucy Moss and Toby Marlow. However, as with many transfers from the Fringe, the West End polish has highlighted a couple of issues within the piece as well as yanking it to new heights. The cast are glorious, and the songs will never fail to astound, but structurally and production-wise there are a couple of hiccups that mar the overall experience. 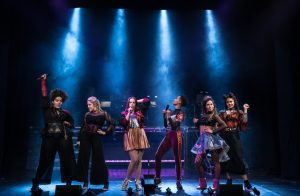 However, this still doesn’t undermine the fact that SiX contains a cornucopia of Damn Good Songs. The lyrics are unashamedly bizarre, historical titbits scattered throughout make the inner academic in me swoon, and the music is ridiculously catchy (when this goes to soundtrack I will be the very first in line). Thank god, for the rest of the piece tends slightly towards the disjointed. Central sections that link the music numbers together are awkwardly static, and it is quickly noticeable that the majority of the queens don’t really have a character arc (with the noticeable exceptions of Katherine Howard (Aimie Atkinson) and Catherine Parr (Izuka Hoyle)). Cressida Carré’s choreography starts out obscuring rather than embellishing the piece – it’s hard not to notice five of the six cast members wandering awkwardly offstage twice to get props needed for dance numbers – although it (with the rest of the production) defiantly comes into its own in the second half once the gimmicks are less noticeable. Around ‘House of Holbein’ area SiX finally starts to properly roar, clawing and kicking with the most wonderful anarchic determination before launching into Katherine Howard’s highlight number about the fetishization of young women in Tudor times.

The main issue with the piece is that clever lyrics and fine music, sadly, alone do not a musical make. Yes, it’s a pretty damn fine place to start, especially with the quality of work that Moss, Marlow and all the cast produce (Atkinson is tremendous, Genesis Lynea wonderful with Hoyle, Renée Lamb, Christina Modestou and Natalie Paris all completing the group of storming singers), but the structure and cohesiveness of other production choices verges on the clumsy side. The end moral (historical women only being seen as property of their husband and thereby having to free themselves from these trappings YES PLEASE) is gutsy and strong and glorious, but the piece insists on battering us over the head with it for two songs as well as a post-script. These issues are, however, easily fixed, and hopefully (with a lick of polish and a tightening of loose ends) SiX might very well have a much longer future here in the West End.