The VAULT Festival is coming to town! From January 24th to March 18th, over three hundred new shows explode across a festival of festivals in their Waterloo home. With new venues, new bars, new food and plenty of surprises, VAULT 2018 is the biggest, fairest platform in London for artists to present innovative, daring work. Here we have a natter with Lauren Silver and her clown show SURPRISE, centering around anxiety and mental health.

How does a girl with social and anticipation anxiety enjoy a surprise party?

Actor, clown and jolly anxious theatre-maker Lauren invites you to a new show packed full of party games and hopefully no panic attacks.  SURPRISE! is an interactive clown show that looks at how we can confront anxiety, overcome fear, and find freedom through laughter. 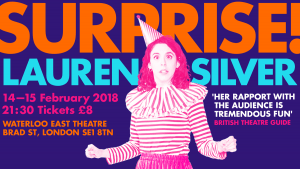 Lauren, originally from Liverpool, is an award winning actress, clown, improviser, theatre maker and musician. She has been creating work for over a decade and this is her first full length show.

‘SURPRISE! came about when I wanted to make something joyful and positive around my own experiences of living with anxiety and panic.’ explains Lauren. ‘In 2016, I co-devised and performed in a Mental Health charity cabaret for MIND which culminated in a comedy show that aimed to raise awareness and looked at how to take control over our own battles with Mental Health.’

This laid the foundations for her own show, where Lauren gained writing and creative guidance from artists including Bryony Kimmings, Peta Lily and Jamie Wood.

‘I knew I wanted to make a clown show and one that could be an interactive and shared experience with the audience. I’ve always found using comedy makes it easier to talk about things that are tough, as many also do. I mean, if I didn’t laugh, I’d cry – and no-one really wants to pay to see that on stage!’

Working with her co-directors Bronya Deutsch and Helen Foster, SURPRISE! premiered throughout 2017 at Bradford’s Theatre in the Mill, Camden People’s Theatre and Liverpool’s Physical Fest.  It was awarded Arts Council funding and received additional backing from Greenwich University’s Bathway Theatre, the #ItAffectsMe Campaign and the Liverpool Mental Health Consortium.

This is the first time the full show will be performed, and she feels that VAULT Festival is the perfect place for this to happen.

‘The support from the VAULT team has been incredible – they are such a wonderful bunch; so nurturing, encouraging and so invested in every show that it absolutely sets the tone for the whole festival. I’m super excited for it to start and to see as much as I can and meet all the different companies – and that’s pretty huge for me as usually social events like this make me want to run and hide!’

Read more about her thoughts on anxiety and mental health on a wonderful post she wrote for the #ItAffectsMe Campaign: http://itaffectsmestories.blogspot.co.uk/2016/10/surprise-by-lauren-silver.html

SURPRISE! is at the Waterloo East Theatre as part of VAULT Festival on 14th & 15th February at 21.30. Tickets and more information can be found here