A bridal ballad of hope, delusion and disappointed dreams, with manic comic creation and a compelling clown making the best of a predictable premise.

Perhaps, Perhaps, Quizás takes its title from the popular Spanish-language song “Quizás” – performed by the likes of Nat King Cole, Doris Day and the Pussycat Dolls – which tells of a lover kept in uncertainty by the object of their desire. It’s an apt title for Gabriela Muñoz’s cross-cultural, wordless (although not soundless) paean to delusion, disappointment and hope. One woman lives in a perennial bridal chamber, rehearsing the ceremony and scoffing the wedding cake, as she waits for the one who will fit into her dreams of monogamous desire. Considering Muñoz has performed Perhaps, Perhaps, Quizás for eight years, the protagonist has been waiting for a long time.

The show begins with a misfire – absent from a perhaps more economic Edinburgh production – as the show is delayed by an overlong filmed introduction to Muñoz’s lovelorn heroine. Filmed in the style of a classic silent comedy, the action and narrative is unclear, especially when projected onto Jackson Lane’s curtained backdrop. Throughout, Muñoz sits in a curtained boudoir, writing love letters and swallowing strawberries. For a show about searching for a connection, it is curious we denied a chance to connect with our heroine for so long. 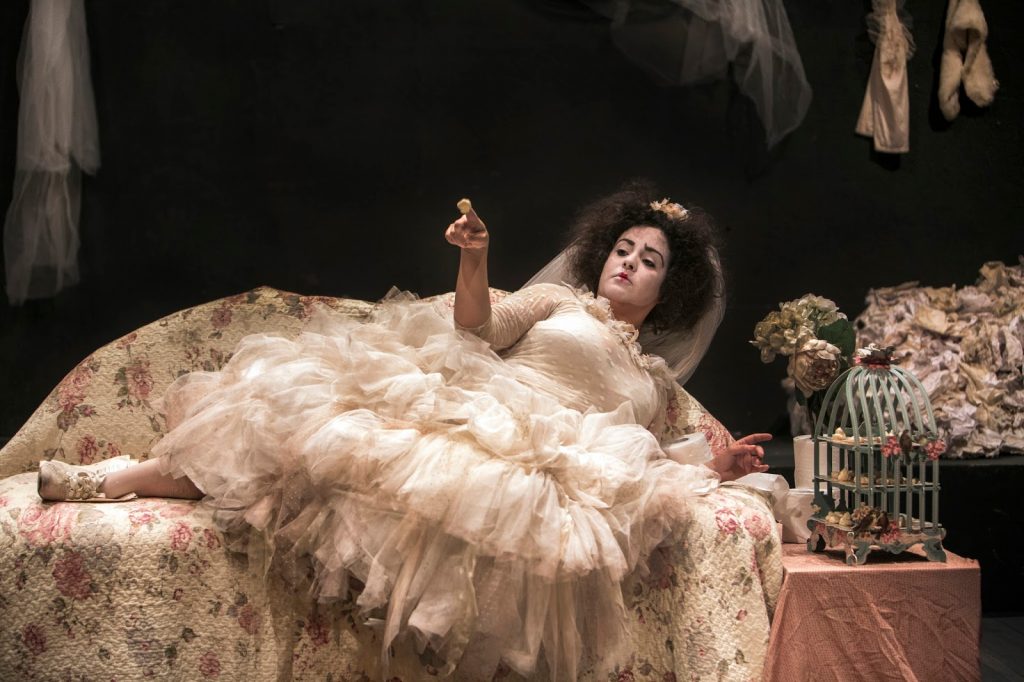 Fortunately, Muñoz is a far more compelling presence in person than on celluloid. With whiteface makeup, painted-on angular eyebrows and a heart-lipstick mouth her every expression is a masterpiece of quizzical bewilderment. This canvas makes her the perfect stooge for whatever faux pas her hapless (audience) helpers and suitors inevitably fall into. It’s a generous safety net for those brave enough to join her onstage – whatever happens, she is as clueless as they are.

For a show about searching for connection and commitment, it is unsurprising that audience participation forms the foundation for much of the comic action of Perhaps, Perhaps, Quizás. In the main, this is handled with sensitivity and generosity by Muñoz, and the greatest moments of the show emerge from a mutual uncertainty. Personally, the most touching moment of the hour was in the silent negotiation of this hopeless bride and her hopeless groom as they attempted to find a waltz pose. The narrative that emerges in the room does feel organic, too – with our audience creating a compelling finale where the enduring image was Muñoz’s elderly maid-of-honour proudly restoring her wedding dress after her abandonment by her chosen bachelor.

The more sentimental content of the show is not to lessen the credit due to its manic comic invention, however. A raucous sequence where the bride-to-be pours wine over herself for the attention of her conscientious and stain-dabbing suitor particularly shines. It also features some of the most inventive uses for toilet roll I’ve seen in a show – and I’ve seen plenty of toilet roll creations.

The closest comparison is perhaps Leandre’s Nothing To Say, featured in the London Mime Festival last year. Both are shows where the relationship between clown and audience stands in for a gulf of possible connection – and a yearning for it. However, where the uncertainty of Nothing To Say accumulated a world of possible meanings, there is something a little directed in the images of Perhaps, Perhaps, Quizás. The lonely bridal obsessive, surrounded by ceremonial trappings – these are images which evoke specific and predictable responses. Whilst a sweet comic confection, I’m not certain Perhaps, Perhaps, Quizás helps us to dream a world outside of our assumptions.