Canadian troupe Cirque du Soleil have long been synonymous with magnificent, gravity defying feats and now their hit show OVO has finally come to London. Playing at the Royal Albert Hall until 4 March, OVO is the story – in the loosest sense of the term – of a community of colourful insects and the egg which they discover. It’s an insight into a hidden world where the forces of life and love are on display in their simultaneously miniscule and all-encompassing glory. 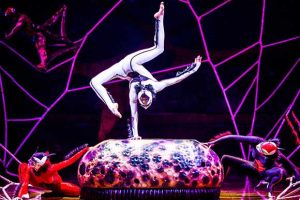 Deborah Colker’s vision and the performers’ commitment to their bug personas does make it feel as if the audience is peering into the below-foot workings of their own garden. Similarly to viewers’ obsession with the squat lobsters and sea slugs of Blue Planet, bugs have never been so exciting as they are in OVO. And there is something Attenboroughesque about it. The choreography is so visceral, so vibrant and tangible, that the audience feel like both explorers and theatregoers; the natural world and the fantasy one which are unfolding before them amaze in equal measure.

In the absence of any true plot, a series of dance, acrobatic, and gymnastic performances are linked together by the group’s clowns and musicians. They fool around to distract from industrial scale set changes and although it’s by no means a seamless transition it is charming, and plays up the show’s considerable heart. Cirque du Soleil has something of an unfair reputation for providing comedy that’s quite simplistic, but in this case the Fly, the Master, and the Ladybug are genuinely endearing. Certainly it’s not just the kids who are laughing.

But, no matter how amiable they are, nobody comes to see Cirque du Soleil for the clowns. They come for the glamour and the action and here OVO does not disappoint. Everything about it oozes beauty, from the Dragonfly’s contortions to the Snail’s song; from the Spiders’ aerobatic grace to the Ants’ dancing feet it is designed to dazzle and delight. Despite every individual performer making an impression some of the acts are truly unforgettable. The Scarab Beetles’ semi-trapeze performance, where women flip and twist in seemingly effortless rhythm as they are tossed from man to man across tiny platforms 30 feet above the audience, is breath-taking. Whilst in the Butterflies’ flying acrobatic duet insects have never looked so impressive, or so romantic.

OVO is neither completely circus or theatre and to judge it as such would be unfair, like Einstein’s poor tree-climbing fish. Instead it is like a firework, or a shootout and car chase heavy action film. Pure and unadulterated spectacle, the ultimate show.