Enticing and yet wholly confusing rendition of the Peter Pan narrative

Neverland is an utterly bizarre kettle of fish. One of the VAULT Festival’s headline pieces by The Guild of Misrule and Theatre Deli, it markets itself as an ‘immersive musical’ following last year’s success The Great Gatsby – but gets so caught up in its own immersive-ness that, sadly, the audience are almost consistently left behind.

The tale focusses on the three boys behind the famous Peter Pan (Peter, George and Michael Llewellyn-Davies) and the inspiration they brought to the now-famous JM Barrie. Introduced to us as boisterous youngsters, there is a quiet tragedy to be seen around their growing up and being able to witness all the stories and fantasies that peppered their younger years melting away. We follow (or try to follow) Peter, Michael and George as they are forced to confront the bitter truths of the world, from the death of their mother to the trenches of WW1 and finally to their own tragic passings. There is a sombre glee about the piece, a realization that JM Barrie’s attempts to keep the boys in Neverland might have been more detrimental than he ever thought – living surrounded by make-believe surely as dangerous as never indulging at all. 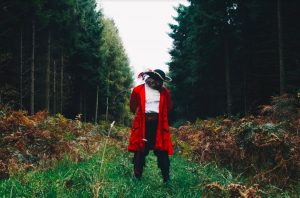 The piece starts off so wonderfully, with the cast gradually organising the slowly-arriving audience into teams to play rounders, pulling people up to dance, a sense of joyful, childish anarchy introduced even before the play officially starts. However, it become increasingly clear that the logistics of the occasion are not just questionable, but have been almost totally and utterly ignored – the theatrical equivalent of locked in the downstairs cupboard, the door chained closed and the key thrown away. The moment the different narratives split up there was chaos – not the fun sort of chaos where everyone feels a bit naughty and excited but total, utter chaos. Actors were trying to deliver pensive lines in one space while shouting and yelling and swearing bled in from other rooms; armies of slightly befuddled spectators were led straight through the middle of scenes by actors in red coats brandishing walking sticks; George died and I didn’t actually notice until informed about it 20 minutes after the piece had finished (spoilers). There is a certain amount of fun in a play that whirls around you in this way, but in Neverland it seemed totally detrimental to the plot the team were trying to tell.

A giant cavern takes up most of the central space, and gorgeous design details are relegated to cramped rooms, barely seen when 30 audience members try to squeeze in, attempting hear their section of the story over the cacophony from elsewhere and, ideally, be able to see the actor as well. I talked to audience members that couldn’t see the first half an hour of the piece as they found themselves stuck behind too many other spectators, audience members that had given up chasing the actors around the place and were just waiting for it to end, audience members that couldn’t stop giggling during profound moments because any sort of emotional attachment seemed utterly impossible in the confusion. This is even more frustrating as it inhibited the performances of the cast, and obscured what was a beautifully profound, very moving narrative. A brave attempt, yes, but not one made for immersive work.