Writer and director Nadia Latif has been named the next Genesis Fellow at the Young Vic. Nadia’s most recent credits as a director include: Fall of the Kingdom, Rise of the Footsoldier, The Calm (workshop) (RSC); Octagon, but i cd only whisper (Arcola); Homegrown (National Youth Theatre); Even Stillness Breathes Softly Against A Brick Wall (Soho Theatre) and Saved (Drama Centre). From 2009 to 2011 she was Associate Director of Theatre503. 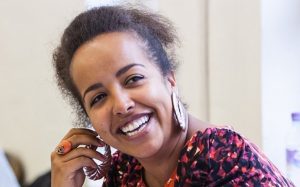 Incoming Young Vic Artistic Director Kwame Kwei-Armah said: “The boldness and depth of Nadia’s writing and directing made her a natural fit as the new Young Vic Genesis Fellow. She’s an outspoken champion of diversity both on and off the stage and I’m excited to work alongside her to nurture our network of artists across the U.K.”
Nadia Latif said: “I’m thrilled to be joining the Young Vic at such an exciting time. I’m really looking forward to helping to continue the theatre’s tradition of telling a wide range of stories by different artists to an engaged and diverse audience.”
Nadia’s tenure as Genesis Fellow begins on Monday 29 January 2018.
The Genesis Fellowship, a one-year grant supported by the Genesis Foundation, enables the recipient to develop their craft as a theatre director whilst working closely with the Young Vic’s Artistic Director. Opportunities whilst in post include supporting the theatre’s programming and artistic planning, contributing to the work of the Young Vic’s Directors Program and mentoring Genesis Future Directors Award recipients. The Genesis Foundation supports the Genesis Fellowship, the Genesis Directors Network and the Genesis Future Directors Award at the Young Vic.