Lähtö (Departure) defies explanation in the same way that its performers defy Newtonian physics. The latest offering from Finnish sensation Kalle Nio, the production falls somewhere between circus, magic, visual art and dance – it is physical theatre at its most inventive. Nio has mastered every visual element, and presents this boundary-pushing piece with supreme skill and imagination as part of London Mime Festival 2018. 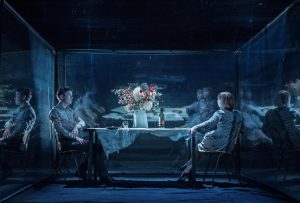 A wordless piece performed and directed by Nio and his fellow choreographer Vera Serene Tegelman, Lähtö has no overarching narrative. Short, movement and video-based episodes revolve around different central deceits – a melting dining table, huge reflective sheets of plastic, a curtain that’s rigged so precisely it almost seems to live and breathe. The experience is both sombre and extremely playful, switching from moments of intense physical yearning or pain, to comedic clothes routines where they that appear to come alive. Samuli Kosminen’s music deftly follows these changes of pace, and helps to bridge the transitions into video projection.

Nio and Tegelman’s skill is mesmerising, and always surprising – just as you think you understand what a particular scene is trying to say, Nio unexpectedly floats into the air on wires, or you realise that the set is being sucked backwards though a curtain. It is so deftly done that you start to doubt your own predictions, and just surrender to the surreal, magnificent beauty of it.

The lighting, design and rigging of the show all deserve an equal amount of praise. As Nio explains about his theatre-making process ‘None of the different elements of the piece have been raised above another. Everything is equally important.’ This egalitarian approach has brought together a talented team of collaborators; Designers Mila Loisio and Kaisa Rissanen’s costumes and set give Lähtö an installation feel, with huge visual impact. Jere Mönkkönen’s lighting complements Nio’s stagecraft perfectly, enhancing the production’s magic.

Ultimately Lähtö’s brilliance rests on deceiving the audience, as all good physical theatre does. By refusing to heavily impose characterisation, or storyline, Nio goes against recent trends in circus to translate physical movement into an overarching story (as can be seen in recent Circa shows, for example). Theatre doesn’t have to have a narrative to have dramatic impact – the beauty of this show is that by providing physical emotional cues, Nio creates room for your thoughts rush in to flesh out the narrative yourself. The show’s images swirl around your brain until you are inventing your own stories – it becomes a very personal journey.