To distil John down to its bare essentials, Annie Baker’s new play is about the disintegration of a relationship. I think. But then, boiling this play down to any kind of summarizing statement or blurb would completely negate the point of having seen it in the first place. The blunt truth is, not a lot happens. Not a lot happens for 3 hours and 20 minutes. And yet, somehow, bizarrely, possibly magically, Baker’s play seems to spin on and on right to the cusp of reality itself.

John is virtually unclassifiable. On the surface it returns to what one can only describe as rather unfashionable naturalism – in the Dorfman, the National’s commonly-perceived more ‘experimental’ venue, finding a heavy red curtain obscuring a profoundly detailed, oppressively quaint B&B is a bit of a shock to the system. Jenny and Elias turn up to spend a couple of days as tourists around Gettysburg and ideally to let their existing relationship ‘heal’, meeting the fantastic Murtis (or Kitty) and her undeniably creepy friend, Genevieve, in the process. So far, so banal. But, between the dolls, the flowered tablecloths and the boxes of cereal, one can feel a breath of something stranger, the hidden eyes of a thousand objects watching proceedings with almost unbearable stillness. 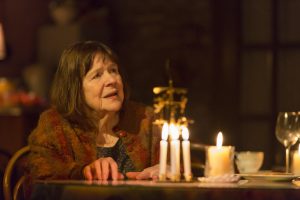 The piece is rippling with layers of symbolism, but symbolism as it’s rarely appeared before. Quite honestly, I could not really tell you what its ‘themes’ were with any kind of confidence about the matter – I don’t even know what I was so enraptured with for three hours. It was like watching paint dry in molecular level, seeing each individual particle lose its sheen, change colour, crack, mix and murk in a thousand different, unexplainable, beautiful ways. Baker’s trademark style refuses to be moved along until it is quite ready to do so, demanding the audience sits quiet, staring at an empty stage while Mertis shows Jenny and Elias around upstairs, barely audible. Conversations are riddled with silence, yet straying on and on to a place where having orgasms with the universe, being watched by a benevolent ‘watcher’ and having one’s ex-husband send Benedictine monks in and out of one’s head seemed just that bit more reasonable. Mark of the production is Mertis’s blurrily absent husband George, who seems to exist in a liminal world of in-between – completely absent from the stage, and only mentioned occasionally, we find ourselves wondering whether he exists at all.

However, writing of this calibre needs a cast that can pull off both deadbeat humour and profound statements to perfection – and there was not a weak link among them. Anneika Rose was wonderfully woebegone as the cheating Jenny, Tom Mothersdale despicable and yet entirely understandable as the downtrodden Elias, trying to come off antidepressants while struggling with his feelings of Jenny’s betrayal. Marylouise Burke is, quite simply, spectacular as Mertis – watching her slowly and painstakingly draw the heavy red stage curtains open and close at the top and bottom of each act is a moment of beauty. She’s not quite part of the same world inhabited by Elias and Jenny, existing in a place where rooms come and go and pianos start playing themselves, but Burke manages to make her both ridiculous, reflective and deeply, deeply familiar. The appearance of her friend, Genevieve (performed with solemnity by the astounding June Watson) in Act Two tips the balance into the surreal – but combines with moments of domesticity that keep everything fiercely comedic.

In summary, I loved it. I know something profound was being discussed, I didn’t have a clue what it was – but I loved it. John is one of these great, silent, thinly-woven plays that discusses everything and nothing, making you ponder the extent of human relationships and how we live with the hauntings of history whilst watching a B&B owner talk with her guest about different diet options. Marvellous.