Review of: Into The Numbers

The Finborough Theatre once again demonstrates why it is a leading playhouse in London, producing a wonderful version of the Obie Award winning play Into The Numbers by Christopher Chen. With intense, creative performances capturing the despair of historic events during the Nanking Massacre in WW2, the play shines a light on humanity, seeking to find the best of us but overwhelmingly illuminating the worst. 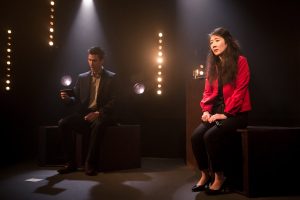 Battles are normally fought, won or lost – but this event was something elset. Going far beyond any rules of engagement, the Nanking Massacre was a systematic brutal torture, rape and slaughter, akin to annihilation of humankind itself. With tales of senseless Japanese victors and headless victims the imagery within the play is powerful and shocking.  Yet it nonetheless has some wonderful rich writing that manages to explore the wider human condition with a focus on denial, forgiveness, moral courage, media and motherhood as it searches for the crumbs of goodness that atrocities so easily overshadow.

The play also explores the psychological damage of such a traumatic event. Minnie Vautrim, played by the engrossing Amy Molloy, captured a desolate tenderness of the American Missionary as she recalls events that cast an evil shadow over her for many years. Others too remain haunted by happenings and, in trying to evaluate the horrors, Chen exposes the mental fatigue and breakdown of the rationale where numbers, ideas, events and even love become distorted and conflated in an agony brought about by the darkness of humanity.

It is neatly directed by Georgie Staight to allow for easy transitions between scenes and the play is further enhanced by an atmospheric sound design by Benjamin Winter. The action of the play is energetically driven by the performance of Elizabeth Chan vividly portraying the American historian, Iris Chang, who unleashes the facts of Nanking to anyone who will listen even at the expense of her own wellbeing. Chan journeys through the mind of the distraught academic recalling and recounting the horrific events so penetrating and pernicious as to make the mind a dark wilderness, where hope seems to have escaped making her conclude ‘civilisations are tissue thin’. There is no safety in number – with obsessive accounting she recalls events in NanKing; around 300 thousand slaughtered, 200 miles of graves as high as a 74 story tower block, There were deaths by dogs, by acid, crucifixion and mutilation – ‘an orgy of cruelty completed in 6 weeks’. Significant numbers are recalled ‘38, ‘45, ‘96 and 2004 – it might be Rwanda or Bosnia – still the cloud of darkness passes over humanity. The solace of numbers and a search for order provides little explanation as the cloud of despair turns in on itself to fracture the mind and she realises that ‘reality is defined by distinction… a repeated spiral of disturbances.’

A voice is also given to the perpetrators of the violence in the guise of a Japanese soldier and Ambassador (ably played by Mark Ota) allowing the play to be  more than a grotesque travelogue of war torn China. Timothy Knightly is impressive as Chang’s husband, as well as doctor and interviewer, making both subtle distinctions and connections between a range of positive but bewildered and ultimately helpless male characters. Into The Numbers explores trauma and the effect on relationships (sometimes with an element of gallows humour), highlighting how loss of life can be treacherous, loss of liberty dispiriting but loss of hope truly bleak and deathly. Here Christopher Chen’s writing brilliantly exposes the mind made fragile, with hope gone, the void of despair and resignation creeping to the ultimate comfort of suicide. It’s a bleak tale that needs telling so long as humanity repeats a spiral of disturbances.