The Jermyn Street Theatre’s offerings for the Spring 2018 season are all about scandal and the impact it has, with four plays focusing on characters (and sometimes real people) who didn’t mind being the subject of public disapproval. It’s the second season for the theatre with artistic director Tom Littler at the helm, and we caught up with him just before Christmas to ask about how it was going.

This is your second season with the theatre, the first of which was on the theme of escape. Where did this one, themed around scandal, come from? 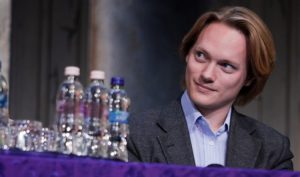 The first one was the ‘Escape’ season, about people living in trapped lives who were trying to break free. This one’s the ‘Scandal’ season, about people who are breaking the rules, going against the conventions of their society and doing things they shouldn’t be doing. When it came to the theme of scandal, we had a couple of the plays booked in, and then it became about finding the plays that would talk to them. Each season should have a conversational element to them – if you come and see 2 or 3 or even four of them, there should be dialogue between them.

How did the different productions come together?

The one about Peggy Guggenheim [Woman Before a Glass] we’ve had booked in for a long time, because it’s coming from off-Broadway, so the nature of the logistics there has meant it’s been booked in for months and months. We always knew that we were going to be opening with this really special project. That became the thing that the rest of the season sprang from.

With Mad As Hell, they’d come to see something in the theatre, and then we got into a conversation. It turned out that Cassie Macfarlane, who’s Jamaican, had heard the story all of her life about the actor __ and his wife, and really wanted to do this play about it. It’s an amazing play, and just an amazing story that I didn’t know anything about. And then of course, Peter Finch starred in the film of Network, and the news had just come out about Network being on at the National Theatre, so it all seemed to work! In the play at least, a lot of the anger that fuels Network and that fuels that role is to do with how a mixed race couple were treated by the Hollywood set of the time. 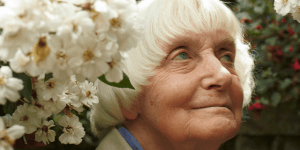 Then we have the two new one act plays by Maureen Duffy. One, The Choice, is about Hilde of Whitby, who was an abbess who became a saint – she talked to kings, broke every rule of her time. So that’s the first half, and then the other play, A Nightingale in Bloomsbury Square, is about Virginia Woolf. I love Woolf, and it’s a really beautiful play, so we’re doing those as a pair. We’ve also got a reading of the entirety of The Waves happening, which I’m so excited for, just before Hilde and Virginia opens, and it’ll be great to see those events happening in conversation with each other.

The final play, The Dog Beneath The Skin, is a really exciting play that I’ve been wanting to do for years and years. One of the real joys about being an artistic director is that you can give your pet projects to other people, and you can say ‘you’d actually do this better than I would’. It’s a really gorgeous play in verse written in the 1930s. It’s about a man and his dog, who go on a quest through 1930s Europe to find someone who’s disappeared, and then after the quest, when he returns home to England, everything has changed. To me the 1930s feels like a really terrifying prescient decade at the moment, that’s the decade that we’re living out all over again.

Is there something about 2018 that makes you want to think about scandal?

Weirdly, we’d had all of this planned before recent sexual scandals hit the news. I think the thing about programming is that this always seems to happen though – I had a similar experience when doing Antigone in 2011, set in the Arab Spring, and then in the middle of rehearsals Bin Laden was shot and that felt very poignant. It’s one of the odd things about drama, is that you put it on and then it just speaks to whatever is happening at that time. I’d love to say to you that it’s a really considered response, but it’s just not – it is just what plays do!

It’s always worth saying that we have a 50/50 employment policy of creating male and female jobs – I say fifty fifty, but if there’s more women then we don’t worry about that, that’s fine. That’s a really important policy for us – and telling female stories as well is really important to us. We pay everyone equity rates as well, which we’re really proud of too, and that’s continuing for the new year. It’s the reason we have small casts, but that’s the sacrifice you need to make. It felt like an important thing to sign up to.

Tickets to the shows and more information is available at the Jermyn Street Box Office and www.jermynstreettheatre.co.uk.