Paul Hunter is the co-founder and co-artistic director of Told By An Idiot, the theatre company bringing Napoleon Disrobed to the stage this season. The play is an adaptation of Simon Ley’s novella of the same name, and imagines a future in which Napoleon didn’t die but lived on in secret. We caught up with Paul as the company was in rehearsals, to find out how it was going. 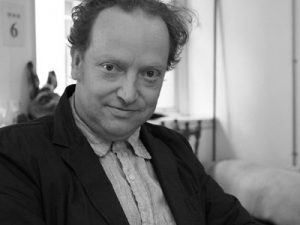 How is everything going in preparation for Napoleon Disrobed?

We are at the end of week 5 of rehearsals and it feels a very exciting time of the process. The mood, feel, and aesthetic of the piece is really starting to come together. We have had the set in the room since the beginning and this has really helped to shape the style and narrative of the show. We have also had all the different roles in the room most of the time from designers to dramaturges, sound designers to lighting designers. This has made for a very collaborative journey and we are about to discover more as we begin to run the story.
What was it about Napoleon and Simon Ley’s novella that inspired you to make a show?
Simon Leys novella ‘The Death of Napoleon’ is a deliciously sardonic fable. It is a wonderful mix of the comic and poignant, the ludicrous and the philosophical. What inspired us to adapt the book for the stage were these delightful juxtapositions, and a sense that we really weren’t sure how we would realise it in a theatrical form.
How are you finding performing as this historical figure? Is there anything you’ve learn’t about Napoleon you weren’t expecting to?
I am relishing portraying an iconic figure like Napoleon. What I am enjoying most is that the Emperor we meet in ‘Napoleon Disrobed’ is not the man  of Waterloo but a bloke definitely down on his luck. A person on a futile quest to regain time and glory. One thing I have learned about Napoleon that I wasn’t expecting to is that more movies have been made about him than Jesus Christ.
Napoleon Disrobed is based on a novel by Simon Leys and is performed and produced by Told By An Idiot.  The productions runs at Theatre Royal Plymouth from 25 January to 10 February, Arcola Theatre London from 14 February to 10 March and Birmingham Rep from 12 March to 17 March. See the Told By An Idiot website for more information.