GOLEM! are a theatre company who love repurposing and reorchestrating familiar texts, and their latest piece Tomorrow Creeps is taking this even further – mashing up sixteen Shakespeare plays and a lot of Kate Bush songs to create something entirely new. We caught up with director Anna Marsland, mid rehearsals for the show, and found out a bit more about GOLEM! and the show itself.

Tell us a bit about the company?

This is our third show together, and we came together from making our first show together. IT was written by David Fairs, and it was a reorchestration of Macbeth called Macbeths. The idea was that it told the same story using the original text, but reformed to be told just from the perspective of the central couple. It was entirely set in their bedroom – so lots of the scenes were invented, and lots of the dialogue was reassigned to Lady Macbeth. It was the start of us playing around with and stretching texts. We decided off the back of that that we’d really enjoyed making something as a four, and that we wanted to do more of it, and w were all really interested in this idea of stretching texts, taking raw material and reforming it. 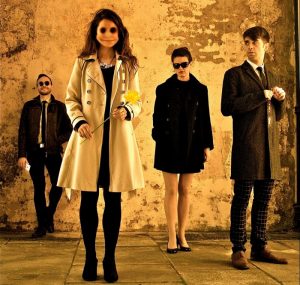 This is our third one in this Shakespeare reorchestration – we’re not just interested in using Shakespeare as a source text, that’s just kind of happened, and the idea is that as a company we want to play around with other raw materials we can repurpose. Earlier this year we were exploring an idea where we take gaming structures and other texts, and play around with those – and we’ve started restructuring paintings, and taking visual art and transposing it to a theatrical medium. They’re really early ideas, but that’s where the company might go next in terms of reusing, repurposing, reorchestrating source material.

With the upcoming show, it’s like one step further in how far we can push adaptation. We’ve done a version with the same narrative, with one text reassigned; then one text with a different narrative – this one is sixteen texts and an entirely invented narrative and inspiration from the music of the story-telling of Kate Bush.

Where did the idea come from?

Two strands really. When we finished Macbeths, it was ambiguous at the end as to whether or not Macbeth was killed by Macduff. Lady Macbeth was dead, but Macduff hadn’t actually killed Macbeth at that point. So we started talking at that point about what would happen if there was a tyrant, and someone who could overthrow him, but they kept him prisoner. It becomes this Hannibal Lecter/Clarice Starling type relationship, where the new ruler has to turn to the tyrannical former ruler for advice on how to run the country. That was the initial story springboard – and then the other aspect was that we really wanted to do something at Vaults. It’s a cool festival, and it’s a really cool festival to be a part of and it’s great that London has it, but we also wanted to do something that really used the space. The two shows we’ve done at the Hope we’ve tried to create a real immersive atmosphere for the audience within the studio space, whereas with this the idea is that the space is already so atmospheric, so that provided the idea of the setting which is an underground cell where the tyrant is being kept.

And what about Kate Bush?

She’s such an amazing storyteller! That was the thing that Dave and I really love about her work. Lyrically she tells stories like Shakespeare does. In the same way that Shakespeare took existing stories and repurposed them into his own work, she takes things like a Bronte novel and makes her version of it. They felt quite fitting in that way. And also there’s a very particular reason in the narrative why aspects of her story become relevant to the plot that we’re creating. I don’t want to give away the reveal, but she and the world that she creates are quite prominent in the story. They might feel like quite an odd pairing to put together, but it’s a very supernatural world, with a big love story in the middle of it, which has an obvious link to Wuthering Heights. And she’s great.

Sound is a big part of the show as well, and I love how with her music a lot of her tracks layer different sounds on top of each other. Our sound designer Odin and I have been talking about a durational soundscape, which exists for the whole of the piece. I think one of the big things about Vaults is that you’ve got to embrace not only the aesthetic, but also the sound quality that comes with it as well. It is drippy, there are trains running overhead in an irregular pattern – so we’ve talked about acknowledging that sound, and layering other things on top of it, so it all becomes this immersive sound that you can really feel a part of.

I think the important thing for us is that it’s very much a new play. Although there’s lots of influences that we’ve drawn on, it’s not that these characters are those characters – it is a completely new story, and that’s my hope that audiences will accept that and run with it, rather than seeing a familiar section and being pulled back into that play. Dave is really good at repurposing those texts, and I try not to bring any of the context from the plays to the interpretation. I guess that’s our job, to make sure that it’s a new story that we’re telling, and that it’ll remain fresh!

Tomorrow Creeps is on at the Vaults, from Wednesday 24th – Sunday 28th January. Tickets are £11.50, and available here.