Price:
From £16
Reviewed by: Alex Wood

Circus was all the rage at last year’s Edinburgh Fringe, with audiences flocking to Underbelly’s Circus Hub, Assembly’s Roxy and Pleasance’s EICC (among others) to see the finest in international talent. But Aurora Nova and Follow the Rabbit’s Fauna stood out from the pack, picking up a Total Theatre Award for Circus, prompting a transfer to London as part of the International Mime Festival. A victory lap in the capital.

And there’s certainly a raft of talent on show in this hour-long excursion through the animal kingdom. Told by five performers inhabiting a variety of zoological specimens, Fauna is an exploration of the space that exists between the human and the savage, the ordered and the disordered. It begins with a record scratching, the structured turning into the disordered, and from there the piece explodes into a cavalcade of behaviours and set pieces.

If the Fringe saw the top class of circus performers, then Fauna is made by the jokers at the back of the room, knowing they’re good, but not needing to do things the way they’re told to. It’s as much a subtle dig at theatrical convention as it is an exploration of the animal world. There’s no reason not to start clowning while dangling from a trapeze swing, one of the performers proves to us. Gravity need not steal all the fun. 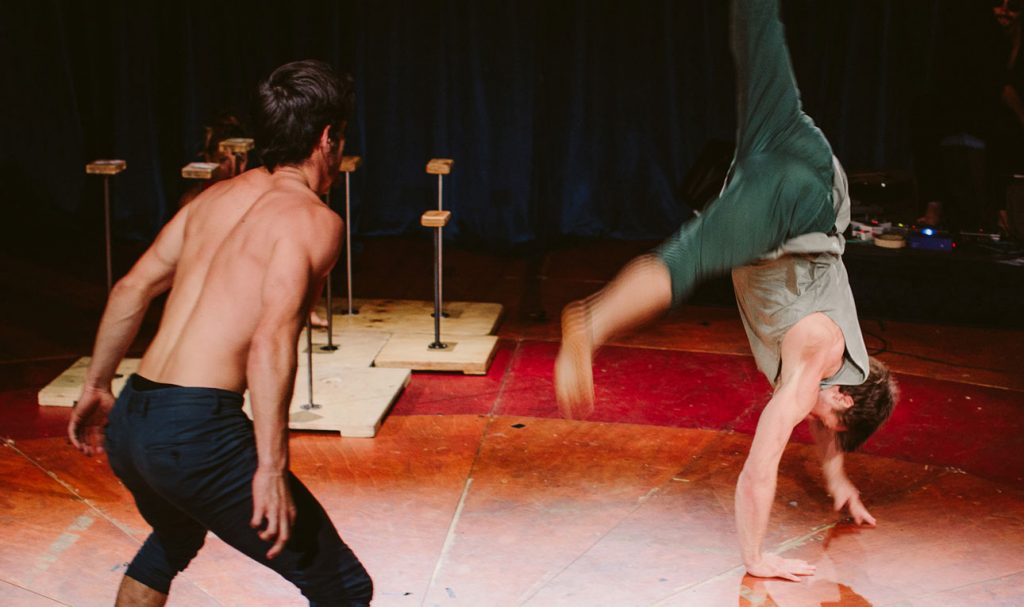 The  show ticks over irreverently with this same sense of conviviality, as the animal world is carefully brought to life – we see apes, birds and insects flit past and clash with equally amusing results. What is more exciting is that, compared with the grand scope of some circus shows, the real intimacy of the space allows us not only to focus on movement, but on the presence of micro-gestures, the slow and subtle shift of centres of gravity, or the veins bulging with the contortion of the wrist. As animalistic as it is, it often feels intensely anatomical.

The pace weakens somewhat towards the middle of the third act, where some of the set pieces feel more indulgent than revelatory, but these moments are bookended by a captivating and well constructed hour of circus skill. It’s impossible not to see why the company have won awards – every single moment seems to be paradoxically slick and spasmodic. Spontaneously honed. It’s these clashing concepts that allow Fauna to leap into the imagination and bring out the best of the animal kingdom. I’d go back and lose myself in it all over again.