Shocking, hilarious and touching - this is a powerful tale of life in the growing up in the East End in 1975 that still has much resonance today. Told in verse and using effective mime, East features some tremendous performances and is a play not to be missed.

Written in 1975, you could be forgiven for thinking that Steven Berkoff’s East, a portrayal of life in the East End of London, would be something of a period piece, but you could not be further from the truth. This play still has the power to shock and retains great relevance in telling a story of the growing pains and rights of passage of young working class people, and the frustrations of an older generation, for whom hope has become nothing more than putting noughts and crosses on a pools coupon. That it works so well is a testament to Berkoff’s timeless script, which frequently lapses into almost Shakespearean verse while incorporating cockney lingo, and a tremendous cast backed by a superb pianist (Carol Arnopp) who manages to incorporate all of the traditional East End tunes. 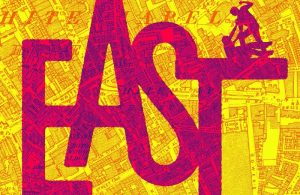 Mick (James Craze) and Les (Jack Condon) develop a strong relationship despite their first meeting ending in a brutal fight over Mick’s girlfriend Sylv. We start to understand Mick’s aggressive nature on meeting his parents; a mother (Debra Penny) who is visibly shrinking from a life that has passed her by, and a father (Russell Barnett) who is a bigoted fascist. It is still shocking to listen to someone extoll the virtues of the 1936 march to East London by Mosley’s blackshirts (disturbingly recreated over the breakfast table) and his claim that the area’s moderns ills are driven by the immigration that Mosley would have prevented. There are lighter moments when the family visits Southend on holiday and sublime mime as Mick and Les go into rhapsodies demonstrating the joys of riding a Harley Davidson.

Where this production really comes into its own is on hearing the touching and telling soliloquies from each of the characters. Though it is hard to pick a standout performance, Boadicea Ricketts as Sylv is quite mesmerizing. She controls the audience like she handles Mick and Les, at times coquettish veering on slutty, and at others painfully vulnerable. Rarely can the King’s Head have seen a debut role as accomplished as this – although the same could be said for Jack Condon as Les. His story of a young man unable to contain his desires for a schoolgirl, who informs on him to escape the wrath of her father, is uncomfortable to hear but still resonates today. Mick’s profanity laden oration and his mother’s account of an encounter on the back seat of a cinema might offend many but they both tell a story very effectively.

East was first performed at the King’s Head over forty years ago and its return, under the fine direction of Jessica Lazar should be celebrated. This is a must-see production of a very good play by actors from whom we will hear a great deal more.