Casting is announced for the UK première of The Grift, an immersive, site-specific experience – part theatre and part game – being staged in the historic Town Hall Hotel in London’s Bethnal Green.

Dropping its audience of just 50 a show into the middle of an adventure in which they are trained in the art of the con, participants will meet characters, solve clues and get a masterclass in the ways of the grifter, all in the interest pulling off one final swindle to take down a seamy criminal mastermind. They will have their intelligence tested and get trained in scams like The Pig In The Poke, The Round-The Corner, and The Money Swap…but in the end will they be sharp enough to take down an evil genius at his own game? An experience unlike anything ever performed on a stage, The Grift will sweep its audience into a thrilling adventure, turning everyday theatergoers into master con men. And when the show ends? They’ll be released back into the world with a whole new skill set—one that can pay off for years to come. 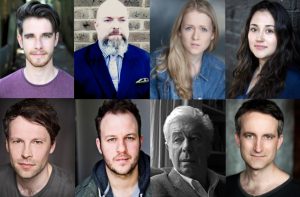 The Grift, conceived, written and directed by Tom Salamon – making his return to the UK after immersive successes Accomplice at the Menier Chocolate Factory and Goosebumps Alive in The Vaults at Waterloo – is produced by award-winning Danielle Tarento (Titanic, Ragtime, Le Grand Mort, Dogfight). It starts previewing on Tuesday 23 January, 2018 and will run to Sunday 25 March, 2018.