The VAULT Festival is coming to town! From January 24th to March 18th, over three hundred new shows explode across a festival of festivals in their Waterloo home. With new venues, new bars, new food and plenty of surprises, VAULT 2018 is the biggest, fairest platform in London for artists to present innovative, daring work. Here we catch up with Joe Sellman-Leava from Worklight theatre to explore what exactly VAULT means to them.

The award-winning, genre-smashing Worklight Theatre are back again with their acclaimed show Monster, having made a huge splash at VAULT last year!  Joe Sellman-Leava tells us about the ups and downs of their 2017 VAULT journey before returning from the 24th-28th January 2018 (with some pretty high-tech sketches to go with it. The man’s a genius)

I have some vivid memories of my week at VAULT Festival 2017. It was Worklight Theatre’s first experience with the festival, so we were eager to get stuck in and see as many other shows as we could. BUT…it was also the week that Nintendo launched their new console and Zelda game. It took a lot of willpower for me to tear myself away from it and turn up to the venue on time. Not enough willpower that I left it at home though… 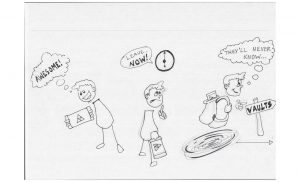 That same week had to settle on a poster image for Monster. I suggested to our photographer, Ben Borley, that we try using the tunnels off of Leake Street, as they have such interesting backgrounds and lighting. Since the image involved me doing some sort of boxing stance, Ben wanted to me to look a bit more active, and told me to run a few laps of the tunnels to get sweaty. Unfortunately it was pretty icy that day, so whilst I ran out of breath I didn’t look any different. We resorted to chucking some water over me to cheat the sweaty look – not something I loved doing in the freezing cold! 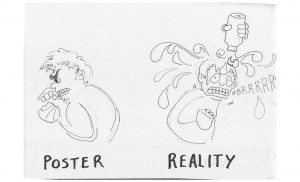 More than anything though, I just remember thinking how exciting it is to have a festival like this in the centre of London. It’s like a mini Edinburgh Fringe, but under one roof and for twice as long! since lots of Londoners are up for finding new, fun things to do with their evenings, it’s brilliant that VAULT Festival has tapped into that, and offered loads of exciting shows that people are willing to take a punt on. Last year, one of our other shows Labels won a People’s Choice Award, which meant such a lot, especially when it was clear lots of people were taking chances on shows – just turning up and taking a punt! This is really encouraging, especially when you’re trying to put new work out there. 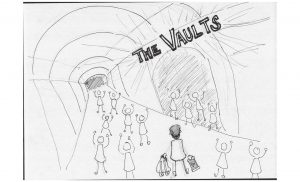 Monster is running from the 24th-28th of January at 19:15 at the VAULT Theatre in Waterloo. Tickets and more information can be found here.