Gloriously vibrant, modern pantomime that shakes up the stereotypes.

2018 seems to be the year the humble pantomime has taken a bit of a bashing – 5 star reviews have been few and far between, and there have been a myriad of voices pummelling the poor ducks and dames into the ground (such as Natasha Tripney’s annual panto-skeptical article for the Stage here). There is a bit of a contradiction at work within the critical mind – a panto must be new, fresh, political and relevant while simultaneously reusing the age-old pantomime stereotypes that are at best repetitive and at worst frankly offensive. Theatre Royal Stratford East’s version of Rapunzel is absolutely not for the panto traditionalists, but has tweaked and adapted the form to present a gorgeously vibrant and wonderfully designed treat for the festive season. 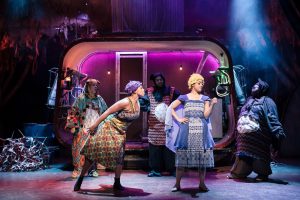 This is experimenting-with-panto-tradition-101 and by God is it glorious. Grime music, a cackling and bopping witch/dame and in-yer-face flouting of gender stereotypes combine in an offering that refuses to let the heavy chains of tradition hold it down. Julie Yammanee storms through the story as a swashbuckling Goldilocks, declaring herself a ‘prince’ and promising to rescue everyone in distress, with Joanne Sandi counteracting as a sweetly brattish Rapunzel. Michael Bertenshaw is truly fantastic as Witch Maddy (a conflation of the normal ‘baddie’ and ‘dame’ roles for those of a more traditional panto persuasion), gurgling and growling his way around the stage before cooling the privates in front of a fridge door (as you do).

William Fricker’s designs draw from patterns and textures based in African art, and are a far cry from the usual flown-in, 2d setpieces that are currently littering London stages. While panto is often perceived as a stereotypically ‘British’ form, these cultural additions create a world which is not some English 1950s Disney ideal, but works hard to reflect the hugely diverse cultures and communities within which Theatre Royal Stratford East operates. There is nothing tokenistic about the diverse casting, and the theatre’s efforts to spread the panto out to local hospitals is just more evidence that the team obviously cares about ‘theatre for everyone’ – not something which most London theatres can claim.

Rapunzel breaks the stereotype in so many ways. Trish Cooke’s decision not to set a romantic attachment as some sort of ‘ideal’ to reach towards is sadly still rather rare in this sort of family theatre, and the message of the piece does reach towards the idea of ‘togetherness’ (although a highly questionable I Spy choice). Wonderful, modern, vibrant pantomime that’s shaken things up, added a splash of colour and – most importantly – obviously given both those in the audience and onstage the best time.