Price:
From £15 (half price for under 18s on tickets over £30)
Reviewed by: Antonia Windsor

A bright bold retelling of the Pinocchio story with the classic Disney songs reworked into a new score, giant lifelike puppets and some magical illusions that will make you go "'ah"

Full of visual splendour with delightful puffs of illusion, Pinocchio at the National Theatre (Lyttleton) will be sure to impress young theatregoers. However more mature members of the audience are left a little confused by a production that pulls strongly in three different directions. 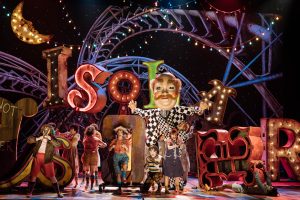 The children get trapped on Pleasure Island. Image Manuel Harlan

With licence to use five songs from the 1940 Disney film, Martin Lowe has created a rich score that weaves folk songs into the historic film score and adds some entirely new melodies. However the musical numbers are mainly the light and somewhat sickly classic songs: I Have No Strings, Hi Diddle De Di and When You Wish Upon a Star. Writer Dennis Kelly, who wrote the hit Matilda, has decided to make the story a more modern morality play with Pinocchio having to discover the human vices of fame-seeking, pleasure-seeking and  avarice before realising that the thing that makes us universally human is pain (not, perhaps, the best message for a family audience to take away with them). While director John Tiffany and designer Bob Crowley draw inspiration from the Italy of Carlo Collodi’s 19th-century original story, with Venetian masks and dark elements like children running at each other with scissors. I was left wishing that they had actually composed an entirely new musical that would have made best use of this dream team of collaborators. I preferred Neil Bartram’s 2011 musical adaptation, that was more able to reflect the Italian roots in catchy tunes such as Terra Di Rigazzi.

The show opens to snow falling on an empty stage and a magical blue flame flying across the front of the auditorium to imbue a lone tree trunk with magical qualities. As we move into Geppetto’s workshop we are introduced to one of the production’s main conceits – the adult figures are played by actors controlling enormous looming heads. The puppets are an incredibly true likeness of the actors and quite beautiful – if a little frightening with their fixed expressions. Thus when full-sized actor Joe Idris-Roberts emerges from the tree trunk as Pinocchio he seems small in an oversized world (and, despite his quest to become a real boy, he is from the beginning the most real person on stage). Jiminy Cricket  arrives in the story first as puffs of dust on the work surface (Jamie Harrison is behind the old-school illusions) before materialising as a cute, green articulated puppet, voiced (and manipulated) by Audrey Brisson. Her role is as Pinocchio’s conscience, but with all her fussing over germs and cleanliness it feels as though conscience has been confused with cautiousness. Surely it is not the role of your conscience to make sure you are wearing a coat, but to make you feel guilty when you misbehave. But Jiminy only rarely picks Pinocchio up on his blatant disregard for others.

David Langham is a deliciously sly Fox in an orange frock coat and top hat, like a cross between Fagin and Willie Wonker. He lures Pinocchio to join a puppet troupe led by the menacing impresario Stromboli (Gershwyn Eustache Jnr) and we get an enjoyable Vaudeville dance sequence during I’ve got no strings choreographed by Steven Hoggett.

The nose (which is usually a crucial part of any Pinocchio production) finally makes an appearance at the top of the second half, but having not been set up as an integral part of the story, it seems a little shoe-horned in. However the pace picks up as Pinocchio heads off with the rebel kids to Pleasure Island and we get some welcome real interaction between Idris-Roberts and an excitable Lampy (played with gusto by Dawn Sievewright). Although the roller-coaster backdrop and adult-size neon letters look beautiful, the production takes a dark turn as the children are plied with alcohol, given scissors to run with and eventually turned into donkeys.

The wire work during the whale scene caused eyes to widen among the children in the audience as did the blue fairy’s flame each time it flew through the air (although the fairy herself, played by Annette McLaughlin was rather serious and lacking in sparkle). Despite its confusion over what kind of show it’s meant to be, I thoroughly enjoyed it. Although my daughter’s attention at times strayed to the activities in the programme.