Price:
Prices vary depending on venue
Reviewed by: Scarlet Evans

Bourne enchants amongst the ashes of Blitz-era London

Matthew Bourne’s Cinderella, as with much of his work, can be best described as cinematic – in every possible use of the world. The scale, the attention to detail, and the influences on the world building in the ballet would all make sense on film. It’s fitting, given that Bourne’s reimagination of the traditional fairytale is set in 1940s war-torn London, a setting that we perhaps associate most closely with wartime movies. 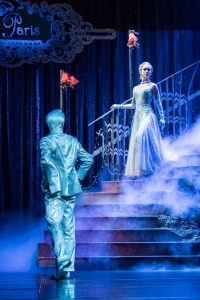 Every element of Cinderella gets an intelligent counterpart in this adaptation. The fairy godmother becomes a pilot-esque angel, who takes Cinderella to the mid-Blitz party in a flying motorbike, while Harry the prince becomes Harry the pilot. Cinderella and the pilot look for each other amidst an air-raid siren, and they’re found in a hospital. In less capable hands, it would be easy for the story itself to get lost in its own setting, but the production never loses sight of its heart. The love story between Cinderella and Harry remains the heart of the production. Ashley Shaw, dancing in the title role, is a wonderful Cinderella, captivating and strikes a perfect balance between the timid stepdaughter and the mature lover. Andrew Monaghan is excellent as the prince, and the two have breath-taking chemistry, which is well balanced with the ethereal moments onstage between Liam Mower’s Angel and Shaw. Mower is stunning, drawing the whole story together with delicate otherworldly magic.

As well as these romantic and heartfelt moments there are, in typical Bourne style, a number of scenes that are brilliantly entertaining – as well as catty stepsisters, we have a trio of stepbrothers, who between them provide regular laugh out loud moments. The family, and the majority of their scenes, are led by the Step-mother, a Morticia Addams-esque seductress whose quick steps were gloriously performed by Michela Meazza. Other great points include the Salvation Army, found in the underground, and the somewhat tongue in cheek foot fetish of one of the brothers. 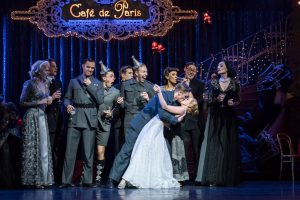 Another wonderful element of this production is Bourne’s usual rewriting of the rules of gender in ballet. The story and the choreography offer a balance between genders – in the first act we see Cinderella search for her pilot with only his abandoned hat as a clue, Meazza shifts regularly between parts in duets, and there is even a delightful gay romance between one of the stepbrothers and a visiting soldier

Lez Brotherston’s design is magnificent, beginning in the greyscale home of Cinderella’s father and stepmother, taking us through the clouds (and the pilots found there), the streets of London, and then the beautiful Café de Paris, site of the ball. Every element of the design slots together perfectly, from the projected flames over the bombed city, to the air raid sirens that echo around the auditorium. Bourne and the New Adventures have created not just a show, but an entire world, and it is one well worth visiting.

Cinderella is on at Sadler’s Wells until 27th January, then touring around the country. See new.adventures.net/cinderella for more information.