Spellbinding cabaret of some of the highest quality

Australian-born La Soirée have managed their first transfer to the West End in style – skipping, rollerskating and blazing their way into the glorious Aldwych Theatre. An eclectic combination of jaw-dropping originality and some more traditional cabaret pieces, the evening involves intense sparkles, a rather imaginative usage of private parts and swathes of darkly dramatic music. A good cabaret, yes, but one does question whether it stands up to the Oliver-award-winning version two years ago, andif one can say that it retains a ‘mould-breaking’ reputation. 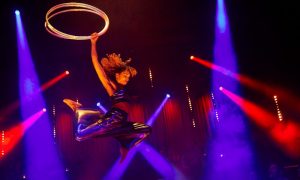 Not that the acts themselves aren’t all of an exceptionally high standard. Bouncing from comedy to aerobatics to moments of what-the-hell-is-this, the performers pull out all the stops. Cabaret Decadanse is wonderful as ever, beautifully handled puppetry that strips itself apart at the end, questioning the distinction between puppet and puppeteer. Amy G’s comedic skill and her ability to get an audience participating without evoking our distrust is remarkable, as is rather more avant-garde Daredevil Chicken – banana-spitting and naked galumphing galore. The English Gents they are not, but The Chilly Brothers’ human trapeze-style act is a welcome breathe of fresh air, tossing each other gaily into the air with seemingly all the effort it would take to juggle tennis balls.

The issue with the composition of the show is that it seems to have become (dare I say it) rather more ‘mainstream’ than its avant-garde origins. This is not to criticize the ability of the acts, but many feel drafted in because of their similarity to certain previous performers. Mallakhamb India’s pole-dancing is wonderful, LJ Markes writhes around on his ropes like some sort of airborn lizard, Katharine Arnold pirouettes enticingly in her hoop – but none of it feels particularly ground-breaking, particularly original. The best example of this is La Serviette’s towel dance – very clever, very funny, but plastered all over the internet with millions of hits and so obviously lifted from Les Beaux Freres. With La Soirée seemingly the place to go for avant-garde cabaret, why ask two performers (from other acts in the show) to imitate a routine (not originally theirs) that went viral three whole years ago?

The evening is still wonderful, still magical, still cabaret of an exceptionally high quality. Yes, it falls just short of its lofty origins, but this doesn’t mean it’s not a worthwhile evening at the theatre. Slightly manic but spellbindingly spectacular, if cabaret’s your jam get yourself down to the Aldwych and slather yourself in it.