This December, Susannah van den Berg is starring in Alice In Winterland, the childrens’ festive offering at the Rose Theatre, Kingston. Based on Lewis Carroll’s timeless works Alice Adventures in Wonderland and Through the Looking Glass, the production follows Alice on her quest to save Winterland, a world of ice and imagination, of mad hatters and cruel queens, curious cats and strong-minded dodos, a frozen world inhabited by the mysterious Bandersnatch and the terrible Jabberwock, where only the most intrepid of girls can make the impossible seem possible. We caught up with Susannah just after the play opened, and asked her about the show. 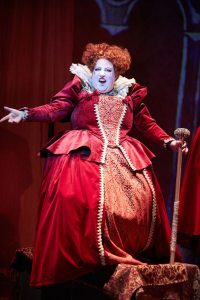 How has Alice in Winterland been going?

It’s been going marvellously thus far. We’ve only had a couple of previews but the audience response has been warm and generous. Rehearsals have been a joy. It’s an incredibly technically ambitious show so watching all those parts come together has been incredible.

How are you finding the run-up to Christmas alongside it?

Well, I couldn’t have picked a better place to spend the run up to Christmas. Kingston is fantastic for shopping. I have various things to pick up each time we have a break and I’ve been decorating my flat slowly but surely when I get home at night. I’m usually working on a show over Christmas so it’s always just as busy. I manage to get back home to the Midlands just for the day itself. Luckily, I have very understanding family and friends!

What is festive about Alice in Winterland, and what will we recognise from Lewis Carroll’s novels?

As the title suggests, the show is set during the Winter – Christmas Eve, in fact – although the Queen (who I play) wants it always to be her Birthday and is disgusted by the thought of Christmas. Audiences will meet all their favourite characters in this version, but you may see some snow or hear a carol along the way, and the arc of the story is original. Rather than being a fairly abstract story, like the original novels, Ciaran [McConville] (the writer) has created a real journey for the central character of Alice. It’s rather like a coming of age story – Alice is tested greatly in Winterland, and through what she learns there she’s able to deal with the challenges she encounters in reality. It’s a story that both children and adults alike can really connect to. With everything that’s happened socially this year, it’s really inspiring to have a female lead like this who really does become a heroine.

What do you think it is about Alice in Wonderland and Through the Looking Glass that keeps bringing audiences back?

I think it’s because we identify something in human nature in all the characters, albeit in exaggerated form! Take The Queen of Hearts, for example. She’s essentially a ruler who has become a megalomaniac – she is someone anyone in power could become, if they’re indulged enough. The characters reflect our own society. Plus, like finding Narnia at the back of a wardrobe, we’d all love to fall down a rabbit hole and discover a fantasy world.

For this production, you’re working with actors from the Rose Youth Theatre. How are you finding working with them?

Incredible. They are more dedicated and hardworking than many professional actors I’ve come across; their discipline, creativity, and development are a joy to watch. Massive demands are being put on them: puppetry, stage fighting, accent work, song, dance (to name just a few disciplines), and they’re all stepping up to the mark. They work as a true ensemble – older members supporting the younger, all taking responsibility for the show as a whole. It’s exciting to join them and I already feel we’re quite a family.

I’d just like to mention the fantastic creative team working on this show. Ciaran’s incredible script, Eamonn O’Dwyer’s astonishing songs and score, a battle sequence of epic proportions created by Lyndall Grant, the quirky expressive movement by Jamie Neale and the detailed puppetry work led by Yvonne Stone… and there are so many more who have enabled us to create this piece.

Alice in Winterland is running at the Rose Theatre Kingston, from now until 7th January 2018. Tickets start at £10, with family tickets available from £75. For more information, please visit their website.