A couple of weeks ago, the Bunker Theatre announced their 2018 season: Ken, a transfer from the Hampstead Theatre about legendary playwright Ken Campbell; a rock reinvention of Electra from DumbWise Theatre; the world premiere of Devil With The Blue Dress, an all-female five-hander about the Lewinsky scandal; and Damsel Production’s Grotty, a piece by Izzy Tennyson about lesbian subculture in London. It’s been quite the year for Joshua McTaggart, Artistic Director/Co-Founder of the Bunker, but he made some time to catch up with us and talk about the new season. When we chatted to Joshua, it had been a few days since the season was released. We asked how he’d been finding it. 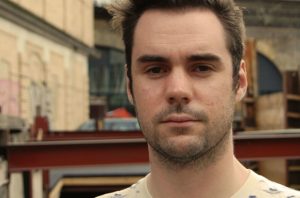 “It’s been really strange! Up until Wednesday has been the busiest we’ve been all year, getting everything ready to launch, and then Thursday came around and I got into the office and thought what do we do now? It’s been incredibly exciting as well; we’ve been working with lots of new collaborators, other producers, directors, and writers, and for the first time this year we’ve coordinated streamlined marketing across the shows, and released our season trailer. In terms of the response, that’s been really positive which has been amazing – really touching, and really reassuring to know that we’re on the right path, putting on what people want to see. The build up has been amazing and exhausting, talking to so many people and putting in so much work. It’s great to have it out there.”

Work on a season like this has taken them the better part of this year. “I met the Dumbwise guys [actor-musician company producing Electra] in April initially, they came round to see the space, I went to see them in Bristol and talk more about their company and the work they were doing, then we confirmed all that in autumn time ready for spring.”

“I met the Damsel team, Hannah Hauer-King and Kitty Wordsworth, back in February. Hannah and I went for coffee, and realised that as artists we have lots in common. We’ve both spent time in America, and are interested in a lot of the same artists and work. It felt like the beginning of a really exciting collaborative relationship. Damsel then did Pint-Sized Goes Damsel here, a one off scratch night all for female writers, and then the Damsel Develops festival in November. We’ve been building towards a full length show, and when Hannah sent me Izzy [Tennyson]’s script, I said this absolutely has to happen at the Bunker, and then I’d been talking to our associate director, Sara Joyce, about the Hampstead show [Ken], and off the back of that met with them. It was very much a ‘the space looks great, let’s bring the show!’ from them, which we were thrilled by! To be transferring a show from a space like the Hampstead, to work with someone like Terry [Johnson] and Lisa [Spirling] who’s directing, it’s a brilliant prospect for us as a space. It’s also a perfect fit for us: a theatre in an experimental, avant-garde performance space having a piece that honours one of the most prolific experimental theatre creators of the twentieth century is great.”

McTaggart clearly has an ongoing relationship with American theatre, having studied at Harvard. The piece he’s directing in spring, Kevin Armento’s Devil with the Blue Dress, taps into that. It’s the world premier of a play about the Lewinsky scandal, perhaps a strange choice for a London fringe theatre. “It is a very American play – the writer is American, all the characters (based on real people) are American, and the Lewinsky scandal itself seems like a very American issue. Even though the play is set in the early nineties, Kevin was writing it in the lead up to the US Election, thinking that Hilary Clinton was going to win, and exploring it as her origin story. In his mind, the Lewinsky scandal is an important moment in Hilary Clinton’s political career, and it’s kind of what launched it – it was after that happened that she ran for office. But then the election happened, and that went in a way I don’t think anyone could have predicted. They were actually workshopping the play the week after the election in New York! Doing that, Kevin and the group he was working with realised that although the play was written with a very different future in mind, it still shines a light on a lot of things that we are dealing with, with Donald Trump in power.”

Why did he want to direct it? “It really struck me for a few reasons. I’m fascinated by why so many people are concerned by the idea of a female commander in chief – so many people, in the lead up to the 2016 election, kept saying that the Lewinsky scandal meant they wouldn’t vote for Hilary Clinton. And then particularly in light of recent events, looking at sexual harassment and assault itself, which has plagued us for such a long time. Devil With The Blue Dress looks at the height of that abuse of power, and the Lewinsky scandal as a whole is interesting because it’s the only time a story of a sexual predator is named after the victim. If we look at recent news stories, it’s always the predator that’s named in the scandal. I think that’s partially what the play is asking – why is that? Why is it hers? And then it asks these questions through a theatrical lens. Putting it on in 2018, it’s related to so much of the zeitgeist; it looks at gender, and abuse of power, and the way that people see and discuss assault. And also the way we see approaches to power.”

It does seem a haunting choice, showing the way a sexual scandal from the 1990s is still so relevant to 2017’s news landscape. Perhaps there are comparisons to be drawn between the Lewinsky scandal and all the sexual assault issues we’ve seen this winter. “It remains a fascination with these figures that society holds in very high regard, and who are very good at what they do. You can argue that Bill Clinton was a very good president. But the question becomes, how do we respond when someone is very good at something, and also still acting in very nefarious ways? And I think that this is something the American public are still processing in regards to Bill Clinton.” It’ll be interesting to see how British audiences, with the general issue of what powerful men do behind closed doors, react to this story. “I had an interesting conversation with someone who’s pointed out to me that British audiences seem more ready to deal with that sort of political conversation on stage than American audiences are.”

With such a close relationship with Damsel Productions, it’s perhaps unsurprising that so much of the season is female dominated work. “It was a very conscious decision to have a balanced season, in terms of gender representation on stage. I don’t see programming as being any kind of roll of the dice – for me, it’s instead a really major statement of intent. What you choose to put on stage, and what you choose to programme, is indicative of what you value (whether that’s as an artist, or a company, or a venue). I know that there can be so many logistical problems with this, but you just have to try and make it work. My goal remains being about keeping that balance and telling that story. Having said this, I’m still aware that our season is very white, and it’s something we need to address from our side. We’re approaching a place where stories about all genders are being told, our queer stories are being told – but if you look at our creative teams and writers, they’re all white. Which is a failure on our part. Luckily, I know that the cast of at least some of the plays will be more racially balanced. But, in terms of programming, we’re only eighteen months in, and I want to get better.”

With the new season announcement also came a shift in ticketing. The Bunker has always had ten £10 tickets available to under 25s per show, which they’ve now expanded to be available to all patrons under 30. “This one is interesting: the parliamentary budget came out last week, and I thought it was hilarious that the government felt like the way to engage young people was by extending the railcard age to 30. Which brings up all sorts of problems about how the Conservatives aredealing with ‘young peoples’ issues’, but does bring up a legitimate question. For me, I’m a 26 year old whose railcard is about to expire, so it made me think. I went into work the next day and brought it up, and said ‘we should probably be in line with this – if the Tory government can bring it up to 30, we should probably be doing the same thing.’ 25 seems like such an arbitrary number anyway, and most of the people I know under 30 still don’t have a house, or a fixed job, anymore than the under 25s do. If part of our remit is to make our performance as accessible as possible, then I think that still applies to people up to 30.”

“If it were possible, I’d want everything to be pay what you can. I go to this amazing queer-friendly, non-binary barbershop in Old Street where they operate a sliding scale, where you pay what you feel able to pay. You have to wait 2 months for an appointment there! It’s inclusive, and it’s accessible. The more accessible you make things the better. It’s about that balance, making it accessible for our audiences – and then also balancing our budgets.”

And there’s still more development coming for the Bunker in 2018! “We’ve just been given, for the new year, all the relevant legal permissions to build a new bar, so that will be coming in 2018 alongside the season! Instead of the low-ceiling bunker bar, we’ll have a new bar outside the building, so people can grab a drink before they go into the space. What was the bar will now be functioning as a resources room, with plays or as a meeting space if people want it. It means we can increase our functionality and aesthetic as a venue, alongside all the new productions. We’ll still have the same post-show events, where people can go and grab a drink and come back if they want to, but it means that as well as stepping forward in our programming we can also be moving forward in our physical operations.”