Review of: The Grinning Man

Visually spectacular musical in serious need of a soul.

Bedecking the Trafalgar Studio 1 with a proscenium arch stretching into a red-lipped, yellow-toothed grin around the sides is a rather startling way to drag spectators into the grotesque world of Carl Grose’s The Grinning Man, but my god does it work a treat. A piece which can only be described as a bizarre mixture between a carnivalesque Sweeney Todd and a self-flagellatory Jesus Christ Superstar, Tom Morris’s production spills out over the sides of the stage just as Jon Bausor’s knowing grin does – murking the edges between ‘our’ world and ‘theirs’, drawing us in to a seedy, parallel universe with brothels in Downing Street and the seat of power in a palace in Catford. 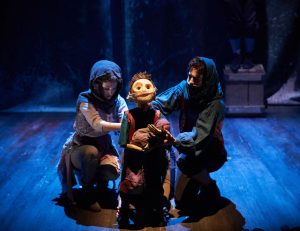 Carl Grose’s adaptation of The Grinning Man follows his recent The Tin Drum (currently playing at Shoreditch Town Hall) and both are a wonderful showcase of his apparent fascination with the bizarre and occult. This time, he looks to Victor Hugo (of obvious Les Mis fame) for inspiration, fixating on a rather bizarre tale of a man’s almost luminescent, bloody grin that was carved into his face when young. However, the difficulty with Grose’s version is said hero, Grinpayne, is easily the least interesting of all the characters onstage. Louis Maskell’s voice is wonderful, his broken-doll movement creakingly disjointed, but even he can’t disguise the fact that Grinpayne does very little apart from sing about being in pain and otherwise stand around looking slightly confused as his tattered smile bewitches all those around him. It is such a one-note role that it is hard to understand how Sanne Den Besten’s Dea can be quite so obsessed with him, and leaves a gap where the heart of the story should be. This lack of an emotional kernel becomes intensely hard to ignore, notwithstanding the efforts of a stellar cast and a gobsmakingly gorgeous design. Julie Atheron’s Queen Angelica is sneeringly marvellous, Mark Anderson’s Dirry-Moir pompously wonderful, with Amanda Wilkins rightly stealing the show as hedonistic (but peculiarly the most ‘human’ of the entire cast) Josiana.

It is telling that Carl Grose obviously has the most fun when freed from the constraints of Victor Hugo’s original plot and is allowed to explore characters in his own particular way. Julian Bleach is marvellous at the creeping, growling Barkilphedro, grinding pebbles with his extraordinary voice and doing a marvellous job at stopping the piece drowning in its own misery. The haunting melodies (Tim Phillips and Marc Teitler) that twine their way through the narrative are also a pretty good attempt at imbuing the piece with some emotion, with the direction as well trying to wring a moral from the last scene. The issue is that all of these elements are so obviously trying to create a ‘soul’ and a ‘meaning’ from thin air – gorgeous attempts but too little too late. The piece is lacking so much in terms of heart that, although almost covered up with the glorious set design, the core is revealed as empty. Visually stunning, yes, with a glorious storytelling concept and an incredibly talented cast – but lacking in any sort of lasting bite.