Review of: Christmas with The Rat Pack Live from Las Vegas

A romp through traditional Christmas songs with this tribute show to Frank Sinatra, Sammy Davis Jr and James Dean. Expect some fine singing and silly antics accompanied by a swinging big band.

If your idea of getting into the Christmas spirit is a rendition of I’m Dreaming of a White Christmas in an ornate West End theatre with a big band for accompaniment, then get yourself down to the Theatre Royal Haymarket for this festive version of the popular tribute show to the Rat Pack – Frank Sinatra, Sammy Davis Jr and Dean Martin. 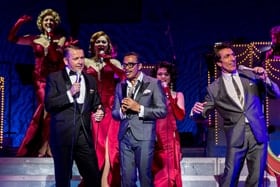 The publicity material shouts “The boys are back in town!”, but they have never really left since Mitch Sebastian’s show first arrived in the West End in 2003. Devised, directed and choreographed by Sebastian, the production recreates an  evening at the Sands Hotel in Las Vegas in 1960. In that year, Frank, Sammy and Dean were filming the first Rat Pack movie Ocean’s Eleven and twice a night they played impromptu performances at Sands (where Frank had a 9% stake in the casino). Their remarkable singing talent, combined with their banter, high-jinx and general tom-foolery had the audience captivated. Celebrities such as Judy Garland, Marilyn Monroe and even JFK flew in to witness the shows. And for those of us that weren’t able to witness the real thing, we have this recreation complete with swing band, bourbon-drinking and cigarette waving (and some jokes that sound pretty ghastly to modern ears).

There is an alternating cast and the night I was there I saw Garrett Phillips as Frank, David Hayes as Sammy and Keiron Crook as Dean. The performances are strong, with some fabulous vocals and not a hint of parody in their characterisations. If you sit back and allow yourself to suspend your disbelief, then you really can imagine you are at Sands in a simpler age. An age where drinking and smoking were glorified, where backing singers (in this case the imaginary Burelli sisters) wore high heels and fishnet tights and where the songs were smooth as the moves.

The Christmas elements of this seasonal variation include a 12-foot Christmas tree, the occasional falling snowflakes, and renditions of some favourite numbers, including a memorable Baby its Cold Outside performed with great precision by Crook and each of the the Burelli sisters – Rebecca Parker, Joanna Walters and Laura Darton. The Christmas Medley attempts to shoehorn in all the remaining festive numbers that didn’t get full exposure, but it’s suitably festive and there is still plenty of room for classics such as That’s Amore, New York New York, and Mack the Knife.

In the second half a drinks cabinet arrives on stage disguised as a sleigh and the show becomes more enjoyable as the banter increases, the songs get shared and the antics increase. If you have ever watched a YouTube video of the Rat Pack, it is a very accurate portrayal of the three drinking buddies – although in this more health-aware age it jars a little to see such a celebration of drunkenness on stage.

Matthew Freeman’s musical direction is superb and he joins in the banter with the singers while ensuring that the musical numbers are tight and the big band keeps swinging. If you want some festive cheer this Christmas this show will have you singing on the way out the theatre.